‘There were sacrifices made’: Field of Crosses, poppy displays for Remembrance Day

Sixty-six crosses are lined up in a Qualicum Beach park, bearing the names of soldiers who made the ultimate sacrifice for Canada in both World Wars.

“This is a recognition of the soldiers from this area, so Qualicum Beach, Parksville and surrounding areas who went off to war and never returned so they are buried somewhere overseas,” said Kim Dorcas of the Rotary Club Qualicum Beach and organizer of the Field of Crosses.

It’s the third year the display of remembrance is being installed in the visible location along Memorial Avenue.

“I think I want it just to be a reminder to the citizens that there were sacrifices made for the freedoms that we have today,” said Royal Canadian Legion Branch 76 Qualicum Beach president Ben Villeneuve.

In Coombs, the Bradley Centre is getting a fitting Remembrance Day update.

A variety of poppies now adorn the building’s facade after a months-long project by members of the Mid-Island Pensioners & Hobbyist Association to knit, crochet and sew beautiful poppies.

“The idea was we’d use our member’s talents as fibre artists to create these poppies so every one of them are individualized and we thought that was appropriate and reflected the individual veterans they represent,” said Erin Holmes who organized the initiative.

In Saanich on Thursday, 536 students and staff from Cedar Hill Middle School gathered for the second annual No Stone Left Alone ceremony at St. Lukes Cemetery.

The poignant gathering saw students place rocks with painted poppies on the headstones of veterans.

“It gives them an opportunity to stand before a headstone and see a real name and see a real date and recognize that these are real people that once served as military members,” Cedar Hill principal Maryanne Trofimuk told CHEK News. 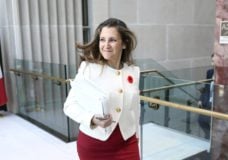 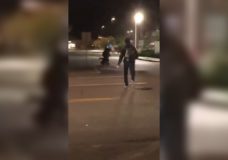 One group of teens linked to multiple assaults on West Shore