Firefighters were finally able to board a smouldering cargo ship that remains anchored near Victoria.

Officials with the Canadian Coast Guard said Tuesday that six firefighters and seven crew members were able to board MV Zim Kingston Monday night as fires in containers on the ship continued to smoulder.

Paul Barrett, planning section chief with the Canadian Coast Guard’s incident command post, said firefighters have identified five containers with internal fires. He said the containers are believed to contain tires and that crews are working to tackle the blazes.

“The firefighting crews are deploying individual tactics to address these fires including the utilization of water mist … to suppress the fire inside the ISO containers. Boundary cooling by vessels will continue in support of the firefighting crew onboard Zim Kingston.”

A one nautical mile emergency zone remains in place around the anchored container vessel and multiple response vessels are stationed nearby, including offshore supply ship Maersk Tender.

Barrett said Tuesday that 20 personnel are now aboard Zim Kingston, including crew surveyors a firefighting team, but noted that it could be days before salvage operations actually begin.

“It’s currently estimated that two to three days are required to make the vessel ready for further salvage actions,” he said.

Officials are also hoping to salvage more than 30 shipping containers that fell from the cargo vessel and are now near Cape Scott.

“We should be more ready to find these containers,” he told The Canadian Press in an interview from Ecuador.

JJ Brickett, federal incident commander and spokesperson with the Canadian Coast Guard, said it still remains unclear as to what is inside all of the containers onboard that have burned.

” Some of the other containers, we’re not sure. Because as you can appreciate, as the containers on one side burns the adjacent tower sort of topples over,” he said, later adding. “So from a crew safety standpoint, the folks that are the nearest to these things, are taking a very measured approach,” he said.

Brickett’s explained that no containers will be leaving the vessel as long as there is still a fire burning on board and the ship is still anchored at Constance Bank.

“Some containers fell over, some were on fire and then some, because of the fire, have fallen over. So, with the safety crews working around them, the firefighters trying to penetrate those containers and get a hose inside of them, they have to be secured,” he said. “They won’t be taken off immediately while she’s at anchor here outside of Victoria.”

The cause of the blaze remains unknown, however, Brickett’s said Transport Canada officials are expected to board MV Zim Kingston Wednesday. He also stressed that there is nothing “operationally wrong” with the Malta-flagged cargo vessel.

“Categorically this ship could steam on its own,” said Brickett.

Officials said air monitoring readings taken Monday at 32 sites near Esquimalt Lagoon and along Dallas Road were all below detection limits and an environmental unit has also been established to monitor for human or ecological impacts, and so far. 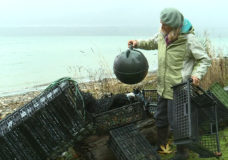 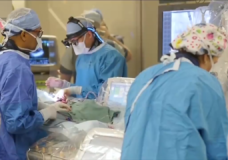