October 10, 2021 updated
CHEK
WatchA fire at a legal grow-op has caused heavy damage to a building south of Nanaimo. Dean Stoltz has more.

A fire at a legal grow-op has caused heavy damage to a building south of Nanaimo.

Firefighters from the Cranberry and North Cedar fire departments were called to a fire at a building on South Wellington Road.

When crews arrived on scene they encountered heavy smoke and flames coming from the building, which happened to be located just down the road from the Cranberry fire hall.

“The flames were up over the cedar trees so it was a pretty big fire,” Cranberry Fire Chief Ron Gueulette told CHEK News at the scene.

The cedar trees behind the building stand roughly 30 metres high.

A tin roof on the building made it hard for crews to get at the flames and made it unsafe to fight so a ladder truck was brought in to pour a continuous stream of water and foam inside.

“It was so dangerous, you can see the roof is compromised,” said Gueulette. “The delta side wall was too dangerous to go up on a ladder so I brought in an aerial device to deal with it.”

Fire officials told CHEK News there was a legal marijuana grow-op inside the building and that there was a lot of fuel that continued to burn.

“The whole building is full of plants, hundreds of them plus there’s fertilizer for the plants and all the electrical wiring to deal with the grow operation so it’s a major concern,” said Gueulette.

No one was home at the adjacent residence when the flames broke out and Gueulette believes an electrical problem may have started the fire.

An excavator was brought in Saturday afternoon to start tearing down the building to allow better access for fire crews.

About 20 firefighters were on the scene for about eight hours.

On scene at a structure fire with #Cranberry and #NorthCedar fire departments on S. Wellington RD. Firefighters have been here since shortly after 7am. ⁦@CHEK_News⁩ pic.twitter.com/jT8DK2oWDO 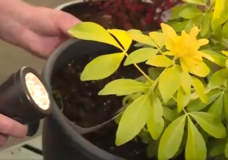 Get Up and Grow: Lighting you can add to your ponds, plants and trees 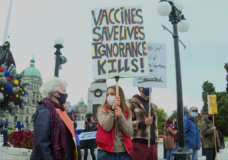