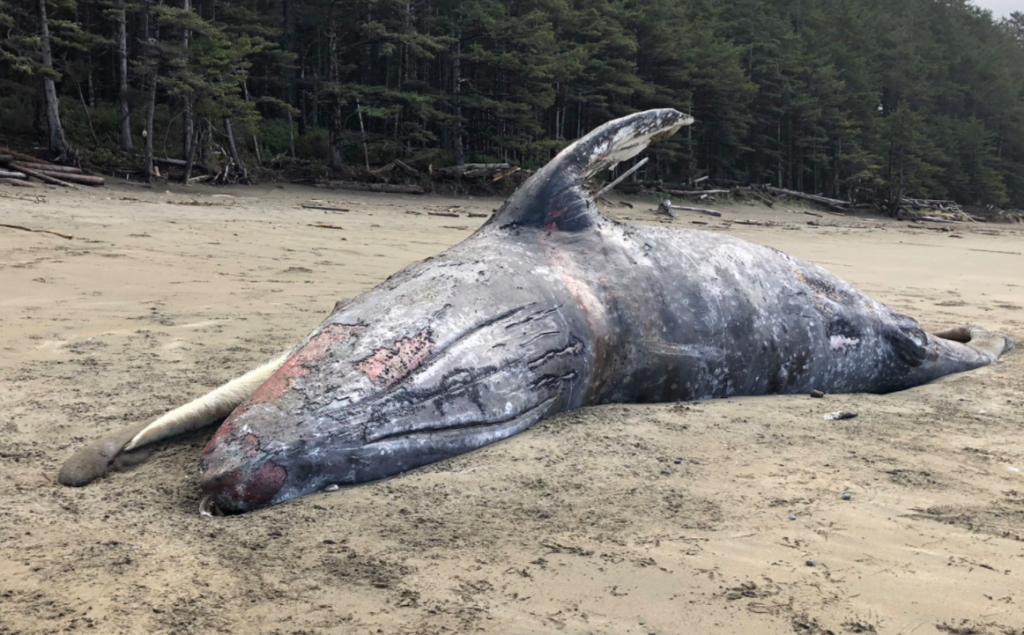 The dead whale was found on northern Vancouver Island by Angela Menzies.

She was hiking a beach with her friend and their sons when they found the whale’s remains.

“It was maybe four feet taller than me, so the size of two minivans maybe, length-wise,” Menzies told CHEK News.

While she said it was amazing to be so close to such a huge animal, she felt it was important to inform both the DFO marine mammal hotline and the Marine Education and Research Society (MERS).

“Lots of times we see dead things on the beach and it’s just like, oh there’s a dead seal or whale, but it’s actually really important to inform research to let them know.”

MERS said the DFO may perform a necropsy on the whale to determine why it died, and why there has been an increase in gray whale deaths in recent years.

“While it is normal that there are some dead grey whales as they migrate back from the breeding grounds of Mexico, the number that have been found dead since 2019 is recognized as an ‘Unusual Mortality Event’ (UME),” MERS said in a statement.

More than 430 gray whales have been found dead since 2019 in Mexico, California, Oregon, Washington, British Columbia, and Alaska, but that number could be even higher.

“They may simply sink at sea or drift farther out to sea or they may come to shore in an unpopular region and may not be counted,” said marine biologist Dr. Anna Hall.

The big question — why are all these gray whales showing up emaciated or beached?

Over the three-year ‘die-off’ there’s still no consensus as to why these gray whales are dying.

Some of the most common causes of death for gray whales are ship strikes, entanglements, toxin accumulation, disease or infections and malnutrition, MERS said.

And scientists are concerned that if this is reflective of a larger change within the ecosystem like climate change, we could potentially see the consequences move up the food chain and affect more species.

Scientists say we’re not seeing that yet, but further complicating research is a recent discovery: Gray whales along the Pacific coast, can actually be broken down into three separate species: the Pacific Coast Feeding Group, the Western Pacific Population, and the Northern Pacific Migratory Population.

The largest population, (the Northern Pacific Migratory Population) which forages in Alaska, was assessed by COSEWIC as ‘Not at Risk’.

But the two other groups, one that summers along the Russian coast, the Pacific Coast Feeding Group, which feeds in scattered locations throughout B.C. and California were both assessed as ‘Endangered’.”

And scientists are calling on governments and other entities, to change their designation.

“They are still managed as if they are one population,” said Jackie Hildering, a whale researcher with MERS. “They are not recognized, any of them, as being endangered.”

Officials say the whale that died is not the same emaciated whale spotted off Ogden Point Breakwater on April 27.

The sighting off Ogden Point has been relayed to authorities including DFO.

With files from CHEK’s Kori Sidaway.

B.C. to use Pfizer shot for kids 12 and older after Health Canada approval