“This is most famous in Baja where, in several of the lagoons, mothers and their calves will actually come up to boats and let people touch them and rub up against boats,” said Jason Colby, an environmental historian at the University of Victoria.

That friendly nature of gray whales is now we know of them today, but they have a long and complicated history with humans and the oceans they call home.

“The gray whale is evolutionary, one of the oldest species of whale that we have, they in fact have sometimes been referred to as a living fossil,” said Anna Hall, marine mammal zoologist with Sea View Marine Sciences.

Scientists believe gray whales appeared in the Atlantic Ocean over 30 million years ago.

“Gray whales are a fascinating species because they are the most coastal of the gray whale species. They feed close to shore on the continental shelf. So they’ve often had the closest contact with people along coasts,” said Colby.

“To a degree, the Nuu-chah-nulth peoples hunted them, but saw themselves as having a relationship of them”

But when North American commercial whalers found out how easily gray whales could be hunted close to shore in the mid-1800s, that, changed everything.

“Once they discovered the calving lagoons in Baja, these sanctuaries for the grey whales, there was this really horrific slaughter that takes place beginning in the late 1840s and ’50s. These lagoons which were really sanctuaries for the mothers and their calves turned into slaughterhouses,” said Colby.

“Not only they went to slaughter those whales, but because the mothers were so fiercely protective of their calves, they defended them, they attacked the whaling boats. So whalers described them as the ‘devil fish’, they were considered the most dangerous whales to hunt.”

Humans, hunted gray whales, to the brink of extinction. In the late 19th century, scientists thought they were gone. But after the Second World War, the whales came back.

“It’s really one of the most marvelous miraculous stories of nature healing, that we’ve seen,” said Colby.

And much of their story of survival is the story of gray whale motherhood.

“They are not only fiercely protective against humans and orca attacks, but they are also astonishingly efficient in the way that they give birth and conserve energy. It’s really their ability to save up energy and make this extraordinary migration, from the Bering Sea to Baja during which they don’t eat for half of the year, and still manage to grow and birth and then feed these calves,” said Colby.

“So much of the story is about the devotion, the efficiency, and fierceness of gray whale mothers, as really the key to helping this species survive.”

As their population rebounded, anti-whaling protections in the 1980s and ’90s helped get the gray whales back to their pre-whaling numbers.

But gray whales are facing a changing ocean. Their population has waxed and waned like any other, but this year, scientists are confirming the biggest die-off in decades.

“In 2018 we started noticing an increase in what we call ‘flaccas’ or skinny whales. There’s always five or six per cent of the whales that we photograph, there’s always a few skinny ones, sickly ones, elderly ones, ones that have been injured. But all of a sudden that percentage went from less than 10 percent up to around 15 to 18 per cent,” said Steven Swartz, a marine mammal biologist who has studied the gray whales breeding and birthing in Baja, for 50 years now.

“Then in 2019, the percentage increased even higher. One of the things we feared the worse of, that if these guys are that skinny after supposedly feeding the previous summer, they’re not going to make it migrating north again in the spring when it’s time for them to leave and go back for their summer feeding. And sure enough, 2019 is when the mass mortality event, got everybody’s attention.”

This was played out in 2019, along the whole coastline where gray whales migrate. One after another, adult gray whales were found beached and emaciated.

As of today, scientists believe a total of 384 grey whales have been found dead along the Pacific coasts of Mexico, the USA, and Canada.

The common denominator? Most of the whales were in an emaciated state.

“Most certainly of the animals they were found in an emaciated body condition which does suggest at some point those animals did starve,” said Hall.

“Climate change as we know is affecting many aspects of the ocean, in terms of acidification, the salinity, the primary productivity. And gray whales are bottom feeders. They feed on clams, the invertebrates, they will also take plankton. This is a piece of the food web within the ocean that can be greatly affected by climate change.”

And scientists are concerned, this mass beaching of gray whales could be signaling a big change in their waters.

But the research was just rolling, then the pandemic hit last March. COVID-19 shut down research labs and halted a lot of the big research happening around these gray whale beachings.

Right now, gray whales are nearing the end of their migration back down south to their safe breeding grounds. But the initial reports aren’t reassuring.

“Unfortunately they reported most of those were very thin. Skinny. Only one mother-calf pair out of the few, when there should be many more,” said Swartz.

But it’s still early. The peak season of mating and birthing is at the end of February beginning of March, and scientists are hoping more healthy whales are on their way.

For now, it’s fingers crossed, for species that ties us together as people across our borders.

“From Alaska, all the way to Baja, [gray whales] tie us together as indigenous peoples, Americans, Canadians, Mexicans,” said Colby.

“It’s symbolic I think that human beings have worked together and refrain from harming them to help them in this recovery. This is a really precious success story we should continue.” 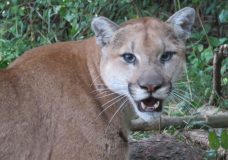 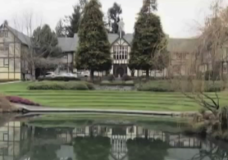