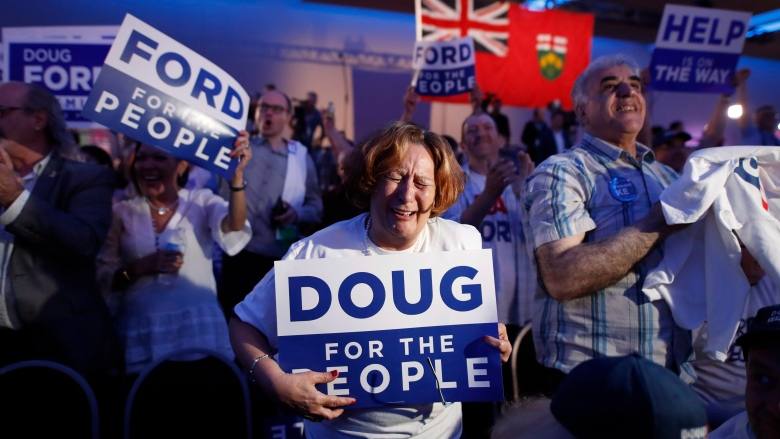 The Canadian Press is projecting a Progressive Conservative majority government in Ontario.

It’s a stunning victory for the party led by Doug Ford, whose campaign was heavy on populist promises but light on fiscal details.

The New Democrats, who had been neck and neck with the Tories in several polls before the election, will form the Official Opposition.

The election has also marked a stunning collapse for the Liberals, who governed the province for the last 15 years.

Ford positioned himself during the campaign as a defender of “the little guy,” promising to lower taxes, cut hydro rates and eliminate the province’s cap-and-trade-system.

Progressive Conservative Leader Doug Ford has won in his riding in the west-Toronto suburb of Etobicoke North.

Ford was a city councillor for the area while his late brother Rob Ford was Toronto mayor, and the family has a long history in the community.

The 53-year-old politician was elected party leader in March after Patrick Brown stepped down amid sexual harassment allegations he denies.

Ford campaigned on a populist message of cutting taxes, lowering hydro rates and the price of gas, and putting more money into people’s pockets.

He did not release a fully costed platform, prompting his rivals to warn of massive cuts to public services under a Tory government.

The last few days of Ford’s campaign were dominated by news of a lawsuit against him from Rob Ford’s widow alleging mismanagement of the family business.

Ford is thanked the people of Ontario for giving his party a majority government.

Speaking to supporters gathered at the Tory campaign headquarters, Ford says under his government, Ontario will enter a previously unseen period of economic prosperity.

Ford, whose favourite campaign slogan was “Help in on the way”, tells the cheering crowd “Help is here.”

He says “the party with the taxpayers’ money is over.”

And he promises to work to win the support of those who did not vote for him.

Andrea Horwath has handily won in her Hamilton-Centre riding, which she has held since 2004.

The NDP leader has consistently polled as the most popular of the three party leaders vying to become the next premier of Ontario.

Her New Democrats saw a surge in the polls halfway through the campaign, triggering a wave of attacks from both the governing Liberals and the opposition Tories.

Horwath’s campaign slogan was “Change for the better.”

Green Party of Ontario Leader Mike Schreiner has won his bid to become the first Green to hold a seat in the province’s legislature.

Schreiner finished third in his riding in Guelph, Ont., during the last election, narrowly behind the Progressive Conservative candidate.

The race was thrown open for this election when the incumbent and prominent Liberal Liz Sandals announced she would not run again.

The governing Liberals, who have been in power for the past 15 years, had been fighting for survival following Premier Kathleen Wynne’s stunning admission of defeat last week.

The province used new technology in this election, and problems with some of the electronic vote tabulators caused delays in a few polling stations.

As a result, Elections Ontario has extended voting hours in seven locations.

Approximately 9.8 million people were registered to vote today, and more than 768,000 voted in advance polls. 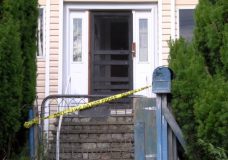 Man sent to hospital after stabbing in Saanich