Donations pour in to ‘Loonies for Loggers’ as forestry strike continues

While thousands of striking forestry workers wait for mediated talks to resume Monday a grassroots group says it has raised an astonishing $80,000 to help families in need.

Tamara Meggitt and Rona Doucette started Loonies for Loggers in September and today as they prepare to deliver more food packages next week, Meggitt’s Royston home is full of boxes of food and toys.

All of it is possible because of the generosity of others.

“We have collectively as a group raised over $80,000,” said Meggitt. “We’ve been in all the North Island communities twice with food deliveries and here we are doing Christmas hampers for 23 communities.”

They are putting together over 300 hampers worth over $300 each and they’re able to do that because people have been so generous.

An engineering company in Campbell River donated $10,000 while other people stop them in their travels to give what they can.

“I had this lady just come up to me and say ‘is this for Loonies for Loggers?’ And I said we’re shopping for the loggers and she handed me $20 and walked away,” said Rona Doucette.

“Just as we’ve been standing here talking we’ve had a donation come in for $200, another donation came in for $300,” said Meggitt in her basement on Saturday.

Tamara and Rona will be heading up island this week to make the much-needed deliveries.

“We’ve had a few emotional moments where we’ve both been in tears listening to the stories,” said Doucette.

“I asked a man if he wanted a turkey or a ham and he started crying saying ‘we love turkey’, so of course we’re crying on the other end of the phone. It’s emotional,” added Meggitt.

All this comes as BC Premier John Horgan works on an aid package for contractors caught in the middle of this 5.5-month long strike between the United Steelworkers Union Local 1-1937 and Western Forest Products.

“We’re looking at programs to help the contractors who have been the unintended consequences of this, that are not able to work, they’re not on strike,” Horgan said Friday.

Many contractors say they’ll need help getting restarted when the strike does end.

“We’ve basically got to the point where we’re on interest-only with our loans because we’re trying to save as much capital as we can. Our start-up costs will probably be close to $100,000 just to get going,” said Ron Tucker, owner of Nimpkish Logging. 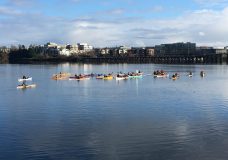 Protesters pick up paddles against pipeline 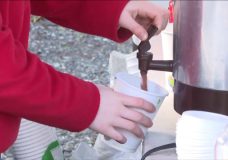