Posted: Aug. 28, 2020 5:20PM | Last Updated: Aug. 28, 2020 5:41PM
CHEK
Watch Fire crews battled a blaze engulfing a motorhome Friday afternoon in Central Saanich. It was contained to the residence and no one was injured, but as one furry friend reminds us, fire crews save more than just humans.

A dog was rescued by Central Saanich firefighters from a mobile home fire on Friday afternoon.

The Central Saanich Fire Department was called to a mobile home fire on Hernwood Lane, off Mount Newton Cross Road, just after 12 p.m.

“Our first-in crews tried to make entry into that building but the ceiling’s already starting to collapse so it was unsafe to go in so we had to fight it from outside,” Deputy Chief Rob Nelson from the Central Saanich Fire Department said.

According to Nelson, the woman who lived in the home had gotten out safely and was able to tell firefighters there were three pets still inside, one dog and two cats.

Firefighters saw one cat inside when they were later able to get into the building and rescued one dog. Nelson said the cat ran from firefighters but the dog received oxygen. A second cat is still missing.

Nelson says crews are planning on re-entering the home to search for the cat when it is safe to do so.

The deputy chief,  who said the fire was in the attic area, said there is extensive damage to the mobile home, including water and heat damage.

“I would imagine it’s going to be a total write off,” said Nelson. “The ceilings falling down. It’s probably going to be a tear-down, unfortunately.”

The Sidney and North Saanich fire departments also responded to the fire, which Nelson says is standard.

“We call out all three departments every time when we get a fire like this.”

Were we doing a drone training operation nearby and got a shot of the fire! pic.twitter.com/s0xhBcTzP3

The cause of the fire is under investigation. Fire crews believe the fire was accidental.

Firefighters at the scene of a mobile home fire in Central Saanich on Aug. 28, 2020. 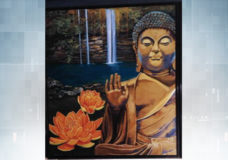 Your Money for August 28