Doctors’ orders: When should you wear masks?

Health officials are reminding Canadians that there are certain situations when masks are required and not everyone needs to wear one.

“The scientific evidence is that if you are sick, then put on a mask to prevent those droplets from flying in any space,” said Dr. Theresa Tam, the country’s chief public health officer on Monday.

If you aren’t sick, however, you don’t need to wear a mask.

Although they may offer some comfort, the odds the masks are actually protecting you from COVID-19 are low.

“There’s no doubt that if somebody coughs at you, the mask is going to catch those large, so-called, ballistic droplets, the ones that spray directly at you,” Gardam explained. “But it’s not [protecting], obviously, everywhere else on your face and it really is your whole face that needs protecting.”

Many doctors agree that wearing a mask could actually be doing more harm than good, by giving people a false sense of security.

“You may actually see an increase in the touching of your face as a result of the mask being present,” said Dr. Richard Stanwick, Island Health’s chief medical health officer. “They’re often uncomfortable and prompt people to adjust them, [by] touching your face.”

Another danger of wearing the mask is removing it improperly. Tam noted the exterior of the mask could be contaminated, and if you touch it while removing it or adjusting it, you could become infected.

There are other strategies that work better to protect you than wearing a mask, Gardam said, including washing your hands often, not touching your face and keeping your distance.

“When somebody coughs or sneezes, 99.9 per cent of virus is in the large droplets that actually are pulled down by gravity,” he said. “So when somebody breathes or coughs, the particles are going out and then they’re dropping down. They’re typically not going beyond one metre, let alone two metres.”

As Canada sees a shortage of medical-grade masks, there has been an uptick in the use of homemade ones. Health Canada, however, urges people to use these masks with caution, because they may not be effective in blocking virus particles.

“In some studies that have been done, [cloth masks] don’t really block very much,” said Gardam, adding that he does still believe there is a potential role homemade masks can play outside of the healthcare setting.

However, Gardam noted, masks only work if you follow all of the rules while wearing them, including washing your hands, protecting your eyes and being careful while removing the mask. 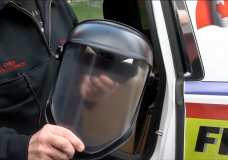 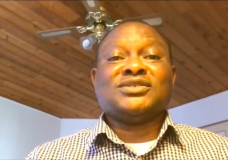 Family of refugees in need of employment amid COVID-19 crisis