A pleasure craft was caught on video approaching a pod of transient orcas allegedly closer than regulations allow, and now Fisheries and Oceans Canada is investigating.

The encounter between a small pleasure craft and a pod of transient orcas was recorded on camera Monday evening in Discovery Passage near Campbell River.

The video shot by Dominik Rüegsegger shows a boat with three people on board appearing to intentionally head straight for the orcas.

“I can not believe that. He’s right on top of them now. I can’t believe it,” he and a woman can be heard saying in the video.

“And as soon as the whale popped up they headed straight toward the whales and they did it over and over again,” Rüegsegger told CHEK News.

A posting on a local Facebook wildlife sighting page mentioned the whales and Rüegsegger says not long afterwards he saw the boat head out from a boat launch on South Island Highway north of Willow Point.

Within minutes he said, the boat appeared to be getting too close to the orcas which in these waters is anything inside 200 metres.

He said he watched the boat for two hours as it tracked the whales northbound for about 10 km towards Duncan Bay.

“Every time when they came really close probably within 50 metres of the whales, the whales went for a long dive and disappeared for almost 10 minutes which is a sign of distress so then the boat waited, he pretended to be fishing and as soon as the whales came up again they headed straight back to the whales,” Rüegsegger said.

The video has been viewed thousands of times online and concerns professional whale watchers like Stephen Gabrysh, owner of Campbell River Whale Watching. He is also president of the North Island Marine Mammal Stewardship Association.

“Yeah, that was tough to watch. I’m not sure what was going on there but it was definitely concerning for the mammals,” he said.

He added, the 200-metre rule north of the Quadra Island lighthouse and 400-metre rule south of it all the way around to Ucluelet is there to protect whales from harm like from getting hit by a boat.

“The other real concern is noise in the water,” Gabrysh said. “Propellers make noise in the water so the closer you get to those animals the more it’s going to disturb them and they rely on a quiet environment to be able to hunt.”

A spokesperson for The Department of Fisheries and Oceans tells CHEK News it has received numerous complaints about the incident.

“Fisheries and Oceans Canada’s (DFO) Conservation and Protection Branch (C&P) is aware of this incident and fishery officers from the Department’s Whale Protection Unit are involved in looking into the alleged violations of the Fisheries Act and Marine Mammal Regulations. As the matter is currently under investigation it would be inappropriate to comment further at this time,” reads a statement sent to CHEK News.

To report a violation or marine mammal incident the Department asks the public for information on any suspicious or potentially illegal activities, or any contravention of the Fisheries Act and Regulations by contacting DFO’s Observe, Record & Report (ORR) Line: 1-800-465-4336

Anyone observing a marine mammal that is beached, injured, entangled in fishing gear or possibly in distress, is asked to contact the ORR line. For more on the kinds of information that is most valuable to support our investigations – Report a fisheries violation – BC sport fishing guide (dfo-mpo.gc.ca)

In July, a Prince Rupert court handed down the largest fine to date involving harassment of killer whales. 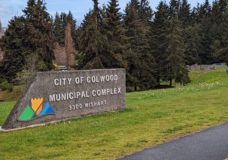 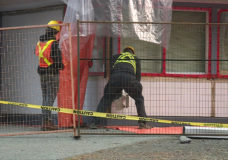 Cleanup underway for a school north of Ladysmith that flooded