Cleanup underway for a school north of Ladysmith that flooded

Posted: Sep. 16, 2022 6:16PM
CHEK
A conctractor conducting repairs at Ecole North Oyster notified the school there was damage due to a flood in the constructiona area.

Hundreds of students at a school north of Ladysmith were out of classes for a second day today after the school flooded.

Contractors are currently working on Ecole North Oyster’s building envelope and somehow water entered through the roof from Wednesday night to Thursday morning and damaged a large part of the school.

Around 4:30 Thursday morning, a contractor working on restoring the building envelope notified the school that rain had come through the roof leading to water damage.

“Seven classrooms in all, the main office, the gymnasium, the multi-purpose room, so all of those rooms have some ceiling tile damage that will need to be replaced, books and resources that were close to the wall in some parts were damaged as well,” said Scott Saywell, superintendent of the Nanaimo-Ladysmith School District.

The clean-up began immediately but the school district was forced to cancel classes Thursday and Friday for the school’s 370 students.

The chair of the school’s parent advisory committee says the responsibility lies with the contractor.

“Extremely frustrated and disappointed in the fact that with being the west coast and it being September that they weren’t properly prepared for the fact that they should’ve had tarps on the building when they took the roof off,” said Nicole Differ, the PAC’s Chair.

Her husband has been able to take care of their children but many families haven’t been so fortunate.

BC Housing manages all the school district’s building envelope restoration projects. The one at Ecole North Oyster is worth just under a million dollars and is 30 percent complete. BC Housing would have contracted the company involved. A company the school district so far hasn’t named.

The school district this afternoon said the air quality tests for asbestos, fortunately, came back negative.

It will allow the clean-up to happen faster and the district says it means students will be able to safely return for classes Tuesday but the school may take a little longer to be fully functional again. 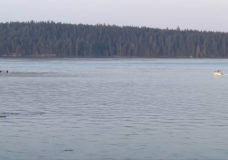 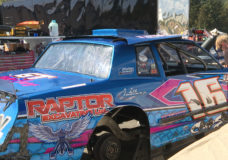