Deuces, deuces and more deuces — as far as the eye can see!

“You don’t think there are that many around and then you come to something like this and see this many,” says Don Lansing, a 1932 Ford owner who drove up from Washington. “It’s just mind-boggling.”

There are close to 1,400 hot rods, street rods, rat rods and other coveted classics on display around Victoria’s Inner Harbour.

One of those other classics, a bright red ’32 Dodge, even had a student driver sign on the dash.

“It gets lots of comments,” says owner Hal Burrows, who drove the Dodge up from Idaho. “I’ve told a few students I can give them lessons — it’s just expensive.”

When it comes to the Deuces, Butch Bowers may well have built more than anyone else attending the car show.

“I hauled cars for 52 years for GM and I built these on the weekends as a therapy,” says Bowers. “It keeps me busy, it keeps me out of taverns.”

The colourful cars have come from across Canada, almost every state in the U.S. and as far away as New Zealand in record-setting numbers.

One of the more unusual ones was an original 1932 Ford panel van laundry truck.

“They made a lot of these but because it was used in industrial commercial purposes that most of them got destroyed so there’s very very few of them around,” explains owner Jim Jard, who drove it up from Los Angeles.

A rare relic from a by-gone era. 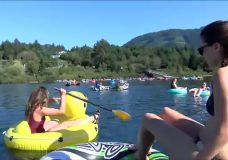