A fast-spreading virus is responsible for the deaths of hundreds of deer on Vancouver Island, according to wildlife management officials.

Adenovirus Hemorrhagic Disease (AHD) was first detected last year on the Gulf Islands but has since made its way to the big island.

“We’ve seen it spread to Vancouver Island and have had positive detection as far south as Sooke and now as far north as Merville,” said Caeley Thacker, a wildlife veterinarian.

When the disease first made its way to B.C., officials thought fertilizer was the cause, but after further investigation found it was AHD.

The virus was first discovered in California in the 1990s. It most severely affects black-tailed deer but mule deer, white-tailed, elk and moose are all susceptible — especially their fawns.

Affected animals are often found dead but in good body condition with no signs of trauma, though there are some visible symptoms.

“We see signs of difficulty breathing, foaming from the nose or mouth, diarrhea and just general signs of being unwell,” said Thacker.

The disease is usually rapid and fatal as it damages small blood vessels in the lungs and intestines. Chronic signs include ulcers and abscesses in the mouth and throat, likely the cause of drooling, that can lead to weight loss and death.

It spreads through nose-to-nose contact but there is no evidence humans, pets and livestock are at risk.

“It’s a virus that can be aerosolized but it requires deer to be in close contact to transmit and pick up,” added Thacker.

There is no cure or vaccine for AHD, but there are some actions people can take to prevent the spread.

“Avoid any activities that would cause deer to congregate such as providing food or water sources,” said Thacker.

The province is tracking the spread, rather than the prevalence of the disease, but Thacker said she has had over 300 anecdotal reports of deer suspicious of having the virus.

If you see deer with possible symptoms you are asked to report them to the Wildlife Health Laboratory at 250-751-7246. 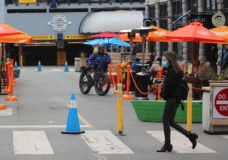 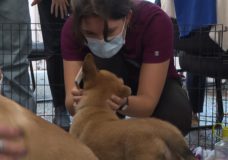