Rita Owen died earlier this month after a COVID-19 outbreak in her Calgary long-term care home.

“She was a tough lady,” said Michael Owen, her son, who lives in Gabriola, B.C. “If anyone was going to come back from this, it initially felt [like] she would.”

Owen remembers his mother as a “real social butterfly,” adding “she was always wandering the halls, talking to people, hugging people, welcoming new residents” at the Mckenzie Towne Continuing Care Centre where she lived.

“I’ve just been absolutely flooded with emails, calls and cards, from people I’d never even heard of before sending me condolence cards because they knew her,” he said.

She died just a few weeks before her 92nd birthday.

“I’ve had a few moments where I’ve cried but it really hasn’t sunk in because I can’t go to Calgary,” Owen said. “Everything has just been put on hold. We had her cremated, her ashes are waiting for a funeral.”

Owen isn’t the only one in a situation like this, dealing with the loss of a loved one during a pandemic.

“Really, there won’t be any closure for me until she’s actually buried with my father, there’s been a funeral, and gathering and just the celebration of her life,” Owen said. “Then it’ll be time to move on. But until then, I’m just kind of in limbo, just trying to deal with it best I can.”

At a time when large gatherings are banned and people are encouraged to keep their distance from each other, grieving is more challenging than ever.

“As a funeral home, our motto is gather, bring the community together and have that support,” said Laura Van Sprang, manager of Sands Funeral Chapel in Victoria. “And at this time with the pandemic, we can’t do that.”

A large part of their role is being able to comfort families, she added.

“The gentle reassuring touch on a person’s arm when they’re experiencing extreme emotion, possibly saying goodbye to their loved one, paying their respects… After we make the connection with our families, we often embrace at the door, on the way out, to show the extra compassion, trust and support that we have for them.”

Now, they aren’t able to do that and instead use gestures and heartfelt looks.

The funeral home is still doing services with a maximum of 10 people, with the option of live streaming it to other family and friends.

“We are still trying to give people comfort and support in this challenging time in ways that we’re actually providing [these] options,” said Van Sprang.

Sands Funeral Chapel is also taking extra precautions to ensure everyone’s safety, including screening people at the door, allowing only two people at once from a household, staggering visitations and wearing gloves and masks during services.

This may be the reality of grieving during this pandemic, but Van Sprang says it won’t be this way forever.

“When the world heals, we will all come together again and embrace and celebrate those lives, grieve together and show those bereaved people in the world that we are connected even though we are apart at this time,” she said. 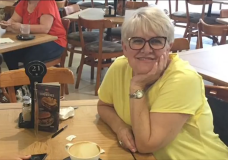 Parksville woman, a crew member, stuck on cruise ship in the Philippines as COVID-19 pandemic stretches on 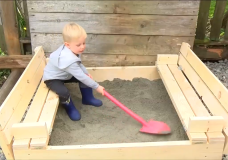