WATCH:  Earlier Thursday, construction work on the Malahat finished up for the long weekend and two northbound lanes will be open to help reduce congestion. Luisa Alvarez has an update on the progress of construction and lets us know when we can finally celebrate its completion.

Commuters driving the Malahat on Thursday noticed the progress.

“Everything seems to be really nicely laid out no bumps so that was nice,” said Steve Filipovic.

That’s because paving on the highway is finally complete. Crews are now focusing on side roads and access points.

“Once that paving work is complete, crews are going to move towards installing the three kilometres of centre median barriers as part of the project,” said Deputy Director for the Ministry of Transportation Janelle Erwin.

Construction work stopped Thursday afternoon to make way for those heading out of town this Labour Day long weekend.

And in order to accommodate the increased traffic, and to hopefully avoid bumper to bumper congestion, two northbound lanes will open until Tuesday evening.

But Erwin says traffic patterns will return to a single northbound lane for work to continue.

“Anything they do will help, southbound is bad too like I’ve seen it backed up all the way to Mill Bay on a long weekend so it will help but It sure is going to be nice when all four are open,” said Dale Tulloch, the owner of Burger Shack on the Malahat

The entire $34 million project is now about 90 per cent finished and is expected to be finished by the end of September.

Meanwhile, the McKenzie Interchange project is only at about its halfway point and there is still much more left to be done.

Right now, workers are focused on finishing ramp construction in order to detour traffic off the Trans-Canada Highway before beginning the next big phase, lowering the highway an additional seven meters to start installing the interchange.

“The target for that and when we anticipate moving the traffic onto the detour is November of 2018,” said Erwin.

She adds that commuters should expect heavy congestion especially in the mornings and evenings with several schools in the area.

The projected completion date for the McKenzie Interchange Project is still slated for the end of 2019. 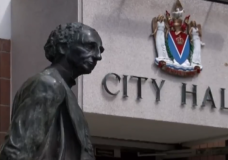