WATCH: A longtime Colwood councillor is at odds with her own city tonight. Several trees were cut down in front of her property and the municipality wants to remove even more, but she suspects she’s being targeted for being a vocal opponent of the administration. Luisa Alvarez has the details.

Councillor Cynthia Day was barricading herself in front of a city-owned boulevard beside her home on Monday. She is at odds with city hall.

On Monday, crews were sent to cut down several trees and remove two rock walls Coun. Day and her husband Tim Day built back in 1995 after the family refused to.

“They’ve threatened to remove it and put the charges on our taxes if we don’t comply,” said Coun. Day.

But in 2003 they obtained a highway-use permit, which allows for residents to make changes to a city-owned property, and under the permit, they are the ones responsible for the maintenance.

“Also under the highway-use permit, it says the city will not maintain the area of my highway use permit,” said Coun. Day.

But in 2017, a tree fell on the neighbours home. The city then removed it along with five other trees including a twenty-three-year-old sequoia.

“If there are structures in the right of way, in the public right of way, it becomes a safety issue and a liability issue for Colwood residents that pay taxes here,” said Sandra Russel, Colwood’s communications manager.

But Coun. Day and her husband say Colwood had no right to remove the other trees, which was a decision that was made after several closed council meetings.

“There has been nothing at all conducted in public and we have been given no opportunity to address council about the issue,” said Coun. Day.

They also say there has been no official report to back up the city’s claim that there is a legitimate safety concern.

“I think this council needs to come clean about what’s happened here and needs to have an open public process, so the citizens of Colwood know how their tax dollars are being spent,” said Coun. Day.

“There is no safety concern in the engineers report that was done after they vandalized our trees. We really don’t understand why this is happening to us. We can only assume its a personal vendetta.”

Coun. Day said she feels it’s because she’s been a vocal opponent of several decisions by the city administrator.

“I gather this is a way to suppress my voice,” said Coun. Day.

A claim the City of Colwood denies.

“Its really not a personal thing. It’s a community standards issue that the city has to deal with,” said Russel.

They vow to stand in the way and protect the trees that are left until they are given a chance to show there is no safety issue through a proper public process.

“I will block them because we have a legal permit everything is protected here and they will need a court injunction to go forward,” said Coun. Day. 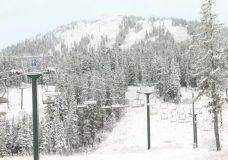 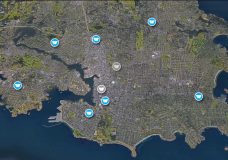