September 26, 2019 updated
CHEK
Watch A new United Nations report is predicting a grim future for our oceans. Scientists are warning that on our current track, climate change will see ocean temperatures warm rapidly, increase in acidity, and the shorelines rise. B.C’s coastlines aren’t exempt, and Kori Sidaway has more on what the South island is doing to prepare.

Our oceans have never been hotter, higher, or more acidic.

And according to United Nations scientists, our Salish Sea, is no different.

In 80 years, scientists say the high tide mark will rise by one full metre. And while that may not seem like a lot, it’s 10 times more of an increase than we saw in the 20th Century.

And scientists say past 2100, our oceans are going to rise even faster, so now is the time to act.

“We as humans have to just face reality and we’re going to have to adapt,” said Kate Moran, CEO of Ocean Networks Canada.

“Coastal cities and coastal communities, governments will have to invest in adapting to climate change in the coastline.”

And for local policymakers, doing nothing is not an option.

“The economic analysis that the Capital Regional District has done shows that unless we take a different approach to sea-level rise, there are costs that by 2100, the economic impacts of doing nothing are about $450,000 per day,” said Victoria Mayor Lisa Helps.

And the City of Victoria says they’re going to start with the Inner Harbour.

“The inner causeway is a much-loved asset. It is an asset near the end of its useful life. It’s going to need some work, and I think we’re going to have to have a serious conversation as a community as to what that asset looks like going forward,” said Helps.

That means less concrete, and more natural interventions like trees that experts say would better withstand the shocks of climate change.

“I think this emerging focus on naturalizing or softening our shorelines is intending to go back to the natural systems because the human interventions aren’t working,” said Fraser Work, Director of Public Works and Engineering with the City of Victoria.

Meanwhile, the offices at Ocean’s Networks Canada are filled with scientists already building a digital model to predict where ocean levels in B.C. will rise to, to help highlight the areas most at risk.

“We know it’s happening, let’s do something about it. We can and we will,” said Moran. 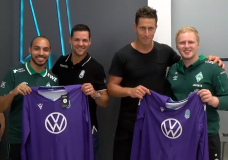 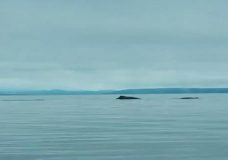 Whale of a dog walk for a Merville couple Tuesday morning