Posted: Jun. 22, 2020 6:32PM
CHEK
WatchAnti-Chinese racism has been on the rise since the COVID-19 outbreak began and Canada is no exception. Jasmine Bala reports.

Half of the Chinese Canadian community reports being called names or insulted during the COVID-19 outbreak, according to a new survey by the Angus Reid Institute.

The poll surveyed more than 500 Canadians of Chinese ethnicity across the country.

“In the last three months, what Canadians of Chinese ethnicity are reporting themselves are fairly widespread experiences with being called names, with being insulted, with being bullied, threatened, harassed or worse. And it is having an impact on their psyche,” said Shachi Kurl, executive director of the Angus Reid Institute. “Racism is not something new in Canada.”

Forty-three per cent of respondents say they’ve been threatened or intimidated, while three in 10 report being exposed to racist graffiti or messaging. Only 13 per cent of Chinese Canadians say they feel like the rest of the country sees them as fully Canadian all the time.

“A majority of Chinese Canadians say that they feel blamed by others in this country for the spread of COVID-19,” Kurl said.

Wuhan, China is known as the epicentre of the novel coronavirus outbreak.

“There have been many folks who say that it is the fault of China or folks that have called it the Chinese flu,” said Charlayne Thornton-Joe, Victoria councillor. “I don’t think it helps at all and we’re all just trying to get through this.”

Reports of racism are frequent and widespread. About 60 per cent of Chinese Canadians say they changed their daily routines in order to avoid these types of experiences.

“We’re a little bit more aware,” explained Thornton-Joe. She reached out to more than 100 friends and family members of Asian descent and asked if they had encountered any racism during COVID-19.

“They sometimes feel that they’ll see a wider berth when people are passing by and [we don’t know] whether it’s imagined or not,” Thornton-Joe said. For example, she added, one day she was waiting in line at the grocery store and the person in front of her kept looking back at her every time the line moved up.

Earlier this month, racist graffiti was discovered on one of the white columns in front of the Victoria Chinese Public School.

“I just shook my head. I think, I never heard about this in Victoria,” said Thomas Chan, a chartered accountant based in Chinatown and member of Victoria’s Chinese community.

But Chan said an incident like this is unusual in Victoria, calling it an “isolated” one.

Younian Jin, owner of Shanghai City restaurant in Chinatown, said his experience during the pandemic has been one of support.

“Mostly in Chinatown, you know, local is very friendly and I appreciate it,” he said. “Everyone is just supporting each other, very warm, like a family.”

The hateful graffiti was removed from the historic Chinatown building and replaced by paper hearts with messages like “You belong here,” and “You are an important part of the community.”

It’s actions like these, Thornton-Joe said, that really show the spirit of the Victoria community. 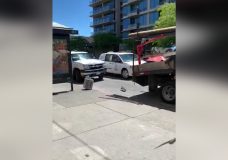 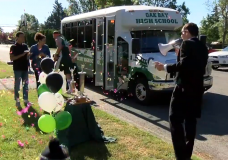