It was an early morning surprise.

Teachers from Oak Bay High School’s physical education department converged on nine houses to deliver the school’s annual athletic awards. It was a surprise for the students, many of whom had to be pried from their beds minutes before the convoy arrived.

The idea was kicked around after COVID-19 restrictions meant the school’s traditional ceremony had to be scrapped. With the Oak Bay bus at their disposal, the groups’ planning quickly went mobile.

“We’re going to take something that’s normally kind of a serious event at the school and give these kids the acknowledgment that they deserve, because it’s been a tough year, and throw little fun at it,” said teacher Kate Baker before the bus left.

“They don’t know we’re coming either, which is the coolest thing. So we told their parents, and we’ll have to wake some of them up and we’re going to make a big noise at their house and make a big deal out of it for them, so it’s going to be a lot of fun,” added department head Richard Fast.

The educators kept the element of surprise throughout the day. The morning was full of shocked and somewhat sleepy teens who received one very loud Monday wake up call.

“It’s quite nice and quite humbling for everybody to come here out of their day. It’s crazy,” said Taleesha Hall.

“It’s very nice to see all the teachers come out and support us and give us awards,” added her brother Tyrus. The duo nabbed junior and senior spirit awards. They were only alerted of the celebration half an hour before.

The parents were also out in force. Tegan Tang’s daughter Ines brought home one of the junior spirit awards and was over the moon with the celebration.

“I’m so appreciative of what all of the teachers and the staff members are doing. It’s incredible, something unheard of,” said Tang.

“Love it, and the teachers are amazing at supporting them and giving them all these opportunities. Crazy times, they made an extraordinary effort to make the awards ceremony unique and special to them and still celebrate the kids,” beamed Jenni Aitken. Her son Max was voted senior boy athlete of the year. 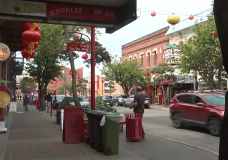 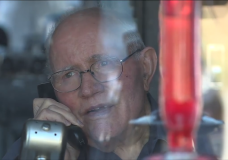 Controlled in-person visits to B.C. care homes could be allowed in the coming weeks