CHEK Upside: Victoria Symphony and Pacific Opera Victoria team up for virtual night at the opera

June 11, 2021 updated
File Photo
With the easing of COVID restrictions, the Victoria Symphony and Pacific Opera Victoria put on their largest virtual production in well over a year.

It’s been a crippling year for artists from Vancouver Island and beyond, but a recent production is offering some hope that live performances are insight.

“We’re getting close,” said Maestro Timothy Vernon, creative director for Pacific Opera Victoria. “You certainly can feel it and I think you can feel it in the focus of the musicians and in those wonderful performances our singers give.”

With the easing of COVID-19 restrictions, the Victoria Symphony and Pacific Opera Victoria put on their largest virtual production in well over a year. Opera singer Allyson McHardy flew in from Toronto to perform the lead role in Phaedra and says the long trip was well worth it.

“The first rehearsal I could have wept,” said McHardy, who joked that she mostly performed over the past year and a half in front of her husband and daughter. “It was a really amazing time.”

The performances were filmed in an audience-less auditorium by Victoria-based Roll. Focus. Productions.

COVID-protocols also called for mandatory masks during rehearsals and physical distancing at all times.

Despite the lack of a crowd, the energy provided by the dozens of musicians was something Timothy Vernon says he hadn’t felt since before the pandemic put the performing world on pause.

“Oh it’s wonderful, it’s very fulfilling because musicians, our whole thing is togetherness,” said Vernon. “We perform together and sometimes we’ll go out on the street and have a fistfight but when we sit down to make music, we’re all focused on the same wonderful thing.”

Vernon says plans are already in the works for live, in-person performances at the Royal Theatre for February 2022.

Both performances can be viewed for free or by donation for the next thirty days at www.victoriasymphony.ca. 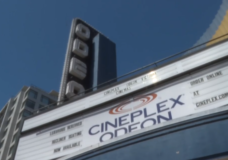 Movie theatres in Victoria are set to reopen next week