Nicola Brailsford has been a Pacific FC season ticket holder since day one.

“In terms of community, it’s one of the best things that can happen to bring people together,” said Brailsford in her Pacific FC shirt.

She loves the fans and the atmosphere and she plans on being in her seat at Starlight Stadium when the team returns to Langford on July 30 in their first home game in nearly two years.

Until then, however, she’s hoping to rally her fellow PFC faithful to give back to victims of the devastating BC wildfires.

“You know, I’m sitting there talking to my girlfriend and she’s like ‘gosh if there was just something we can do’ and I said ‘well there is something we can do, let’s do something,'” said the Colwood native who lives part-time in Vancouver.

Inspired by the atmosphere of Pacific FC tailgate parties, she reached out to her favourite team for help.

“I told her, ‘hey it’s last-minute but we have a match against Forge on Saturday we can do a watch party for that bring our fans out’,” said Hamilton Mack, Pacific FC manager of sales.

Brailsford also reached out to several local businesses and the Royal Canadian Legion who all stepped up in donating food and supplies.

“I’ve met a handful of really great people so far just in the last six days getting this together,” said Brailsford. “This is a grassroots fundraiser that we organized.”

Brailsford and Pacific FC will be throwing a barbecue watch party tomorrow night at the Island Training Centre in Langford, as Pacific FC plays a broadcasted match against Forge FC on the road. The fundraiser will benefit the red cross, supporting victims of the BC wildfires.

“Come for a beer and a burger for charity and stay for a pretty amazing match between two of the best teams in Canada,” said Mack, whose team currently sits second in the Canadian Premier League table.

The event kicks off Saturday at 5:30 p.m. at the Island Training Centre located at 2888 Kettle Lake Dr. 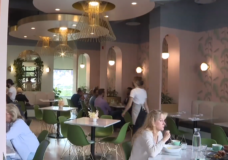