March 3, 2021 updated
CHEK
Watch For three years Oak Bay's Gabriele Matheson has been selling traditional Rwandan baskets on behalf of the residents of the small town of Gashora.

When Gabriele Matheson visited the small town of Gashora in southern Rwanda, three years ago, she was mesmerized by the town’s basket weavers.

“I met the basket weavers of Gashora and fell in love,” says Matheson.

During her visit, Matheson was also acutely aware of the struggles each resident was facing.

“The children are very vulnerable and stunting and malnutrition is a big problem,” says Matheson. “When I left that day, I promised them that I would help them create a better market for their baskets and we would also support them through fundraising to build the first preschool for Gashora.”

It was that promise which led Matheson to start selling the Rwandan baskets across Vancouver Island, with all proceeds going directly to the weavers in Gashora.

“So the family gets helped immediately and then whatever is taken in over and above that goes into the school and to the feeding program and any other educational programs,” adds Matheson.

Thanks to countless basket sales and other fundraisers Matheson has raised $25,000 for the town, enough to support 250 families. She also spearheaded a campaign to outfit Gashora’s soccer teams with shoes and uniforms.

“They had to share the shoes and the uniforms between all the teams,” says Matheson.

“They only had one set for one team and so people in Oak Bay have donated their shoes and some clothing,” adds Matheson.

It’s been an amazing partnership between the two communities.

“Bringing these two worlds together, for them it’s not even the money and the things we send,” says Matheson.

“It’s the fact that at the other end of the world there’s a group of people that care,’ adds Matheson.

To purchase a basket or make a donation, send an email to [email protected] 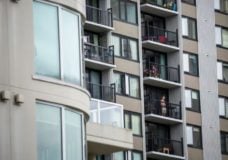