A Vancouver Island therapy dog program is once again getting a fundraising boost thanks to a calendar fundraiser.

Operation Freedom Paws is a non-profit founded in the U.S. that pairs rescue dogs with veterans and civilians coping with post-traumatic stress disorder or traumatic brain injuries.

“We will pair them up with a dog and run them through a 48-week program,” says OFP Canada chief executive director Barb Ashmead.

“All of the dogs that OFT has are rescues except for two that have been donated.”

Now approaching their second anniversary Ashmead and her team are branching out with other programs, whether it’s providing homes for rescue dogs from Afghanistan or training diabetic alert dogs, which help sense low or high blood sugar.

“They sense it because the body has pheromones and perspires in different ways, so the dog learns to sense that really quickly.”

One of the most recent OFPC graduates is Erick Huggins, who has type one diabetes and his Golden Retriever Simba.

“My biggest struggle is I don’t feel my low blood sugar at night, so he’s jumped on me in the middle of the night and licked my face until I woke up,” says Huggins.

“I wouldn’t have woken up by myself, I would have slept through it.”

Finding funding for the program is a constant battle, but fortunately for Ashmead, the island community has stepped up with various fundraisers, including Duncan photographer Pauliina Saarinen who creates an annual calendar.

“People enter their dogs for $10 per dog and send a picture and then they start taking votes,” says Saarinen.

“Then all the winners, the 13 winners get a photoshoot with me and I photograph the winners for the calendar.”

Submissions for the dog calendar contest start May 1st and run until June 12th. To learn more about Operation Freedom Paws Canada, visit their website. 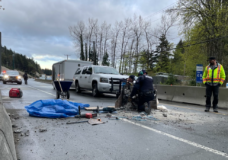