CHEK Upside: Cyclist begins quest from Victoria to Newfoundland in support of charity

“I came to Victoria to start my journey across Canada,” said Bigirimana, who goes by the nickname JaBig.

The Montreal-based DJ has tackled similar cycling feats before. In 2016, JaBig set a Guinness World Record for the longest continuous ride in one country – cycling from St. John’s, Newfoundland to Victoria, then up north to Tuktoyaktuk, Northwest Territories. He conquered the 15-month, 7,000 kilometre ride while experiencing -40 degree Celsisus temperatures.

Bigirimana was recently overseas in the midst of a five-year, 100,000 kilometre cycle by day, DJ-by night tour. That all ended, however, when COVID-19 forced Bigirimana to return home.

“The pandemic happened when I was in Europe and the Canadian government urged me to come back home, which I did,” said Bigirimana.

As Bigirimana returned home with few DJ gigs and little on the go, the Rwanda-born JaBig decided to pursue another cross-country ride. And he’ll be riding with purpose, as JaBig is looking to raise funds and awareness for World Bicycle Relief.

“They distribute bicycles to health care workers in Africa,” said Bigiramana. “It’s the difference between attending to two patients a day or attending to fifteen, so basically, I’m biking for bikes.”

Once the staff at Victoria’s Broad Street Cycles heard of Bigiramana’s story, they offered to get his bike in optimal shape.

Bigirimana says he’s lived a privileged life compared to many he knew growing up, and he just wants to help any way he can.

“I figured why not do something that I enjoy that also saves lives. And that’s where raising money for World Bicycle Relief came from.”

On Thursday morning, Bigirimana symbolized the start of his coast-to-coast ride by dipping his bike in the Pacific ocean along Victoria’s Dallas Road. It’s a journey he looks to wrap up with his front wheel dipped in the Atlantic in a goal of forty days. To learn more about Bigirimana’s ride, click here. 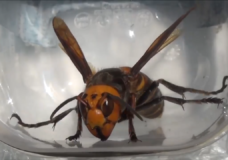 Traps set for Asian giant hornets on Vancouver Island, but experts say they aren't back yet 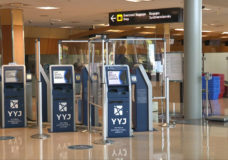