Staff at CFB Esquimalt are excited after a seal pup was born on the base shoreline, giving hope that environmental stewardship efforts are working.

Naval officers came across the seal’s while doing a shoreline cleanup on Sunday.

“Mom had a birth on the beach,” said Michael Bodman, manager of safety and environment with CFB Esquimalt. “Which was great to see that portion of the shoreline being used for nature and completing important parts of their life cycle.”

He says this is a sign that environmental remediation work on the beach has been successful.

CFB Esquimalt has been doing remediation on the beach since 2012 to dig up waste left by the British Navy, who arrived in the 1840s.

“So far we have completed 12 areas in the harbour where we have cleaned them up and then put back clean material to then help mother nature recover and grow into maybe what it was like before,” Bodman said.

He says it’s not just the seals that have been seen on the beach.

“We had a spawn of herring just over my shoulder in the entrance to Esquimalt harbour and we hadn’t seen any herring spawn that we’ve documented since roughly the 1950s,” Bodman said.

There are still four more areas of the harbour that need to be remediated over the next few years.

“Hopefully after our work and in another five to 10 years we will kind of be able to measure things,” Bodman said. “But some of these exciting things like the herring spawn, the orcas being seen and the whale, we definitely take as a good indicator that we are on the right path.”

Starting in 2025 CFB Esquimalt plans to target the wood waste that was left behind by a former saw mill on the north side of the harbour. 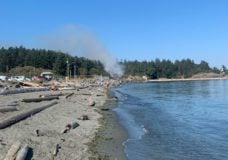 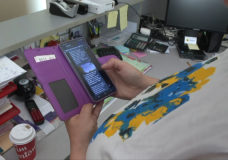 Ukrainians in Victoria hope for peace on Ukraine's Independence Day