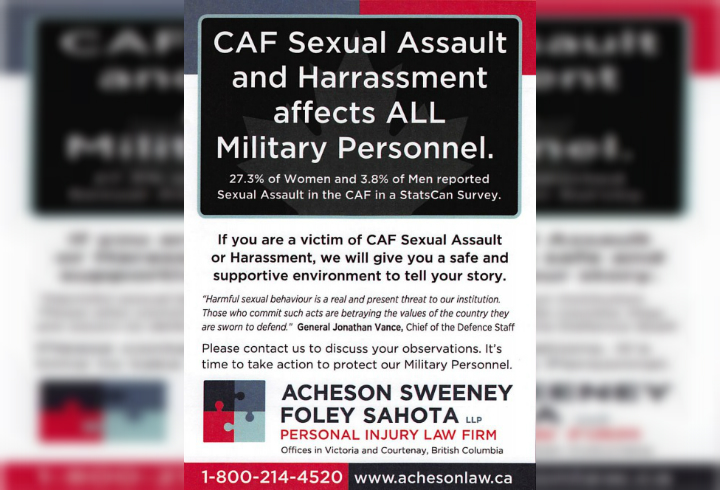 The military base newspaper in Esquimalt has rejected an ad from a law firm looking to represent individuals sexually harassed in the Canadian Armed Forces (CAF) because it could amplify the issue.

The ad from the Acheson, Sweeney, Foley and Sahota personal injury law firm, which has offices in Victoria and Courtenay, offered victims of sexual assault or harassment in the CAF, a “safe and supportive environment to tell your story.” It also had a quote from Chief of Defence Staff Gen. Jonathan Vance saying harmful sexual behaviour is a “real and present threat” to the military.

The firm submitted the advertisement back in December and a few edits were initially made.

However, senior leadership at CFB Esquimalt decided to ultimately reject the advertisement that the law firm put forward.

“Our newspaper cannot be used as a vehicle to further amplify the sexual harassment issue currently in the mainstream media,” Melissa Atkinson of the Lookout newspaper wrote in an email to the law firm.

She also said the Lookout is a military newspaper responsive to the military chain of command.

The law firm’s request was also forwarded to the base’s public affairs officer who supported the newspaper’s original position. The ad was rejected in December, however Lookout staff did say in an email that it would accept a generic ad if it made no reference to the CAF and the Department of National Defence.

The newspaper is distributed on the base and at different locations in Victoria. It regularly accepts requests for advertisements.

Acheson, Sweeney, Foley and Sahota has started a class action lawsuit on behalf of former and current members of the military, alleging sexual harassment and assault of female and LGBTQ members of the CAF. Lawyer Rajinda Sahota said more than 100 people who have served in British Columbia have come forward. The firm also has several intake appointments regarding the lawsuit per week.

He said the law firm wanted to submit the ad as an alternative resource for individuals who want to speak about sexual harassment and assault.

“Our concern echoed the concern of Gen. Vance,” Sahota said.

Sahota said he was disappointed in the decision not to run the ad and called it a “missed opportunity.”

“I didn’t think it reflected well on the Department of National Defence,” Sahota said.

The Canadian Forces has faced criticism for sexual assault incidents in the past. A survey released by Statistics Canada in November 2016 found 960 full-time members, or around 1.7 per cent of the regular force, reported sexual assault in the past year.

In April 2015, former Supreme Court justice Marie Deschamps released a report that found in the military a “frequent use of swear words and highly degrading expressions that reference women’s bodies, sexual jokes, innuendos, discriminatory comments with respect to the abilities of women, and unwelcome sexual touching.” In the report, she said sexual misconduct is “endemic” in the Canadian military.

Vance has spoken out about the problem of sexual misconduct, but in February said the media has created “very toxic narratives” in the coverage of sexual harassment in the military. 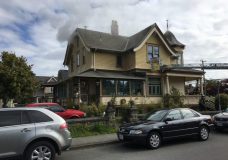 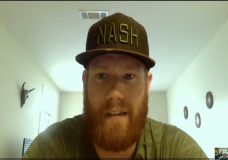