CFB Esquimalt: A day in the life of a sailor in training

For navy Lt. Evan Park, becoming a sailor with the Royal Canadian Navy was a lifelong dream.

“It was something that I always wanted to do growing up,” said Lt.(N) Park.

He’s been in the Navy now for six years and completed his basic training to become a naval warfare officer.

“I’m the one who is on the bridge with my eyes on the window or looking at the electronic navigation aids like radar and GPS, making sure the ship is pointing the way it needs to go to get from point A to point B and do that safely,” said Lt.(N) Park.

After 18 months of training, he’s now joined the fleet and as every officer has to do, he’s looking to specialize.

“Other colleges of mine get to specialize in above water warfare, below water warfare, clearance diving, there is a lot of different fields you can choose,” said Park.

“You’re the one the captain looks to for actual safe navigation of the ship,” said Lt.(N) Park.

In the Navy, learning is a constant and a mix between theory and practice.

“We can actually engage the students with advanced technologies to complement the theoretical and the practical,” Lt.(N)Park.

But the way sailors train now has changed from what it used to be, Cmdr. Annick Fortin knows that first hand.

“When I came through venture in 1998 we used paper charts we didn’t have the smaller vessels that we have now we used a lot less technology,” said Cmdr. Fortin.

She’s now the Commandant for the Naval Fleet School Pacific, has 1200 personnel under her command and plays an active role in making sure the sailors are the best they can be.

“We are going to offer in the future a lot more simulation which is a lot more cost-effective and it enables us to have our sailors at home more often than we used to,” said Cmdr. Fortin.

Park is getting his hours in with the simulator because in two weeks, he’s headed out to see how well his skills in practice measure up at sea. 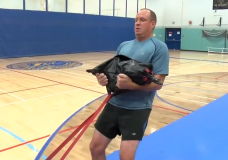 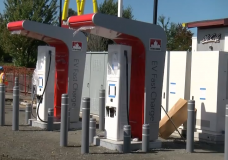