WATCH: A Central Saanich man armed with only a log ran into the frigid waters off Island View beach Monday to save two men who had capsized their canoe. April Lawrence reports.

When Rob Clifford was pushing his one-year-old son Luca in his stroller along Island View beach Monday he never imagined he’d end up in the frigid water.

It was around 4:15 p.m. when he heard people down by the water asking for help, so he grabbed the stroller and went to investigate.

“I saw two guys in the water, their canoe had flipped over,” Clifford said.

The men, who had been out crabbing about 200 metres offshore, were trying to stay afloat but one was in serious trouble.

“The one guy was pretty cold, he said his body was starting to shut down and he wasn’t able to swim himself,” said Clifford.

Two women on shore had already called 911, so Clifford asked them to watch Luca. He then stripped down to his boxers, grabbed a nearby log, and ran into the water.

“I thought I was capable of doing it so I went out and did what I could,” he said.

The Joint Rescue Coordination Centre sent a Parks Canada boat and a Sea King helicopter from the Victoria airport to the scene, but by the time they arrived, Clifford had already brought the two men to shore.

Using the log as a float for the man in trouble, the other man and Clifford kicked their way in.

“We got the one guy out of his soaking wet sweater and jeans and so forth and once the Coast Guard game they gave him some blankets,” Clifford said.

The man was assessed by paramedics and taken to hospital as a precaution.

Clifford says his extremities were numb but he was otherwise okay.

He is reluctant to take credit for the rescue.

“It was helpful that the other two ladies were here, they deserve a lot of credit too, they were able to call the Coast Guard and watch my son when I went in, so it was a group effort for sure,” he said. 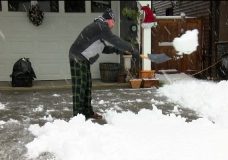 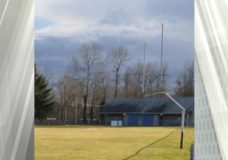