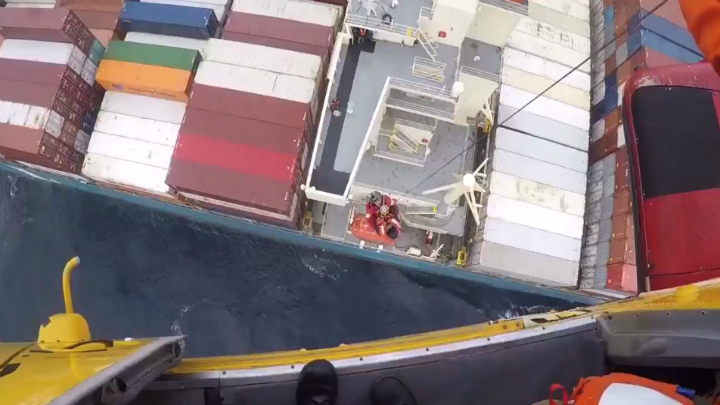 WATCH A Royal Canadian Air Force aircraft from Comox rescued two injured people from a ship off the coast of B.C. on Thursday and Friday. Credit: Canadian Armed Forces/Twitter.
Footage showing the aircraft rescue of two injured workers from a container ship off the coast of B.C. has been shared by the Canadian Armed Forces. The video was posted to Twitter on Monday. The aircraft, which is from 442 Squadron Comox, went to the ship after an engine fire on the MOL Prestige southwest of Haida Gwaii. The Joint Rescue Coordination Centre said three people were inside the engine room when a “major” fire broke out. Two of the crew members injured in the fire were rescued on Thursday while a third person was treated on the ship. A total of twenty-one crew members were onboard at the time. The Sir Wilfrid Laurier, one of the centre’s biggest relief ships, went to the scene to support the rest of the crew while they waited for a tug to arrive on Friday. The crew still had light, heating and communication from an emergency generator. The MOL Prestige is a 70,000-tonne ship nearly 300 metres in length. She’s registered in Singapore and was heading to Tokyo from Vancouver. It is now being taken to Vancouver.

Teamwork at its best: @RCAF_ARC aircraft from Comox rescued three injured people from a ship off the coast of BC, while @CCG_GCC , @Transport_GC and civilian ships in the area assisted the ship in distress #ThatOthersMayLive #SAR pic.twitter.com/GGQ2wCxumS

Details about sale and use of pot in B.C. 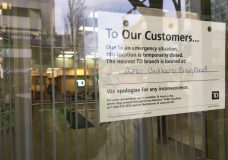 One arrested after bank robbery in downtown Victoria