Canada roars back to beat the U.S. at world juniors 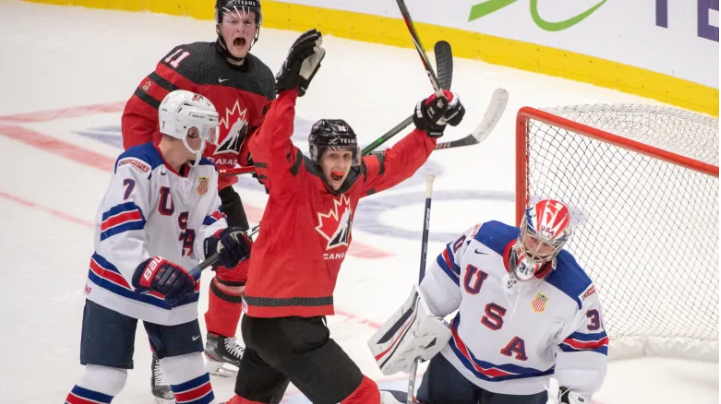 Ryan Remiorz/Canadian Press
Canada's Dylan Cozens reacts alongside teammate Alexis Lafreniere (11) after a goal against the United States in the opener for both teams at the world junior hockey championship in Ostrava, Czech Republic on Thursday.

Alexis Lafreniere scored seven seconds after the United States tied the game late in the third period as Canada beat its North American rival 6-4 on Thursday in the opener for both countries at the 2020 world junior hockey championship.

Barrett Hayton, with two, Connor McMichael, Nolan Foote and Ty Dellandrea, into an empty net, also scored for the Canadians, who got 28 saves from Nico Daws.

Lafreniere, the projected No. 1 pick at the 2020 NHL draft, added three assists.

After Shane Pinto buried his second of the night for the U.S. with 3:18 left in regulation on the Americans’ third power-play goal of the night, the 18-year-old Lafreniere scored on a slick move to put his team back in front, getting in behind the U.S. defence before deking forehand and sliding the puck just past the right pad of sprawled-out netminder Spencer Knight.

The U.S. pressed late with the extra attacker, but Dellandrea sealed it into an empty net with 70 seconds left on the clock.

Nick Robertson, with a goal and an assist, and Arthur Kaliyev also scored for the Americans, who got 26 saves from Knight.

The Americans saw their streak of 12 straight victories to open the under-20 event snapped.

The countries usually face off later in the tournament when placed in the same group _ often on New Year’s Eve _ but instead met on Boxing Day.

Next up for Canada is Saturday’s tilt with the Russians, while the U.S. goes right back at it Friday versus Germany.

Down 2-0 after the first period where they didn’t generate much of anything offensively, the Canadians came out flying in the second with three goals in just over 10 minutes.

McMichael, the Ontario Hockey League’s scoring leader before joining the national team, got things started at 3:31 when he took a feed from Akil Thomas off the rush and beat Knight.

Hayton, who was loaned to Canada for the tournament by the Arizona Coyotes and was named captain on Wednesday, tied it on a power play at 6:34 when he took a pass from Lafreniere at the top of the face-off circle and wired a one-timer shortside just seven seconds after Pinto went off for holding.

Foote, whose father Adam won two Stanley Cups with the Colorado Avalanche and also captured gold at the 2002 Winter Olympics, then gave Canada its first lead at 13:03 on another man advantage when he beat Knight upstairs.

Pinto appeared to score the Americans’ third power-play goal in three chances late in the period, but time expired before the puck entered the net in front of 8,693 fans.

Daws, who was making his international debut for Canada at any level, made a couple big stops in the third period to keep his team ahead before Hayton beat Knight on another power play off a feed from Lafreniere at 10:47.

But Robertson, a Toronto Maple Leafs prospect, got the Americans back within a goal at 4-3 on a wicked shot with 7:45 left in regulation before Pinto tied it with the Americans’ third power-play goal of the game.

Canada, which according to the website eliteprospects.com is icing its youngest-ever roster at the world juniors with an average age of 18.6 years, found itself down 2-0 after 20 minutes.

Pinto, a 2018 first-round pick of the Ottawa Senators, opened the scoring on a deflection at 3:10 with Hayton in the box.

The goal came as Canadian fans at Ostravar Arena were in the process of passing a giant flag across the lower bowl.

Canada couldn’t connect on a man advantage of its own, but started to get going midway through the period with an energetic shift capped by hulking six-foot-six defenceman Kevin Bahl using a 10-inch height advantage to lower the boom on Bobby Brink.

The Canadians didn’t really threaten Knight’s goal, and the Americans doubled their lead with 1:28 left in the first on another power play when Trevor Zegras drew the puck through his legs after Bahl fell at the blue line before finding Kaliyev.

The U.S. came in having won four straight and six of its last 11 against Canada at the world juniors after picking up just two victories _ albeit in the 2004 and 2010 gold-medal games _ in the countries’ 10 previous meetings dating back to the 2000 tournament.

While none of the players on the ice Thursday had ever suited up against one another on this stage, there’s plenty of familiarity at lower age groups, including at the under-18 worlds and the annual Hlinka Gretzky Cup summer showcase.

One of the players with zero familiarity is the undrafted Daws, who came out of nowhere with a banner start to the OHL season to grab the starting job despite having never played for Canada before this month.

The Canadians, who have won the world juniors 17 times since the event’s official inception in 1977, finished a disappointing sixth at last year’s tournament in Vancouver and Victoria, B.C., following a stunning overtime loss to Finland in the quarterfinals.

On the other side, the Americans headed to the Czech Republic having won a program-record four straight medals, including last year’s second-place finish after losing to the Finns in the final.

Canada won the tournament in both 2015 and 2018 in North America, but hasn’t topped the podium in Europe since the last time the Czech Republic hosted in 2008.

This report was first published by The Canadian Press on Dec. 26, 2019