‘He’s lucky to have been saved’: Bystanders rescue man at Nymph Falls near Courtenay

An unidentified man had to be rescued by bystanders at Nymph Falls near Courtenay after getting trapped by high water in the river.

It happened Aug. 18, as the man, who appeared to have been tubing near the falls, became trapped on a rock in the middle of extremely fast-moving water.

Other people nearby are seen on video using a rope to attempt to rescue the man, who eventually tied one end of it around him and jumped into the water and was pulled to safety.

The tube was seen spinning around in the nearby current.

“He’s lucky to have been saved,” said Paul Berry, president of Comox Valley Ground Search and Rescue. “He would have ended up where the tube was which was a recirculating hydraulic. It would have been very difficult for him to get out.”

Numerous signs were posted nearby warning of “above normal flows” in the river between Aug. 14 and Oct.

Berry says people often underestimate the power of moving water. He also says this situation could easily have ended in tragedy had the rescuers not been successful in their attempts to save him.

“What looks benign at first, once you get into it you can get trapped in it,” he said. “It’s hundreds and hundreds of pounds per square inch of water pressure on you making it very difficult to move.” 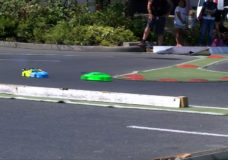 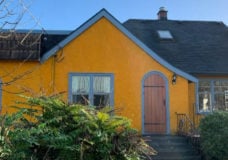