“We were going highway speeds on our side and he was keeping up with us,” said Hannah. “We were just hoping we didn’t see a head-on collision and make sure everyone was safe but it was pretty crazy to see,” he said.

Police say an elderly man had been driving in the wrong lanes during the busy morning rush hour for a full minute. Police gave him a violation ticket and followed him home.

“He was about 93-years-old, got very confused with the turns on the highway and made an improper U-turn,” said West Shore RCMP spokesperson Const. Nancy Saggar.

Not far away, near the Helmcken exit, West Shore RCMP members were on scene at a crash after a stolen truck rammed into a light standard. The suspect fled on foot.

He had allegedly stolen the truck shortly before the crash from a good Samaritan who had spotted him walking on a highway barrier and stopped to help.

The suspect was eventually tracked to Portage Inlet where he was found floating in a canoe that had been stolen from a backyard.

“Our primary concern was the safety of this individual,” said RCMP Const. Alex Berube.

Officers tried to negotiate with the man to return to shore.

“They recognized that he didn’t have any paddles on this canoe, so he wasn’t able to get very far he was trying to paddle using his hands, didn’t work out for him,” said Saggar.

He eventually gave up and jumped into the frigid water before heading back to shore where he was wrapped in a blanket and taken to the hospital for a mental health evaluation. Potential charges are still being investigated.

While all of this was happening there was yet another scene unfolding on the West Shore after a suspicious package was reported at a bus stop near Ruth King Elementary.

Goldstream Avenue was shut down for nearly two hours until it was eventually determined the suspicious object was just loose electrical wiring that had been wrapped in plastic.

It was such a chaotic morning the RCMP said even their most senior officers rolled up their sleeves to help.

“When it comes to a situation it doesn’t matter what rank you are we’re all going to be there to help each other out,” said Saggar. 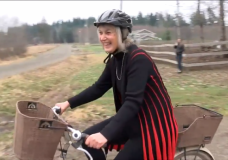 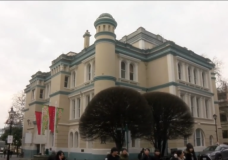