The body of a University of British Columbia professor who went missing on Salt Spring Island earlier this week has been found.

According to a BC RCMP media release, Sinnika Gay Elliot’s body was located on Saturday.

Elliot had been reported missing on May 12 at 2:15 p.m. after she went out to do some errands. Her disappearance sparked multiple search efforts involving more than 130 search rescue volunteers from 21 different regions across Vancouver Island and the Lower Mainland.

RCMP say although a “full determination” has not been made, they do not believe criminality was involved and would not be commenting further on the matter.

The BC Coroners Service is also conducting a separate investigating to determine the cause of death.

Elliot was a sociology professor at the University of British Columbia

“Sinikka is a treasured colleague. She is an exceptionally skilled scholar with a passionate commitment to social justice and equality for all,” reads a May 14 statement on the school’s website.

Residents on Salt Spring Island say they are shaken by the news.

“There’s more of a personal connection and it’s tougher to see negative things happen here as much of a big city because you are closer to community members,” said Jess MacDonald. 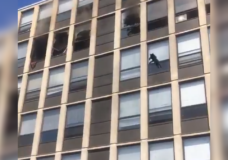