A boat has sunk off of Swartz Bay after it was destroyed by fire Friday afternoon.

Dylan Carter, marine search and rescue co-ordinator with Joint Rescue Co-ordination Centre Victoria, said three people were on board the 30-foot (nine metres) pleasure craft when they saw light smoke coming from their vessel in Shute Passage. They called 911 at 11:19 a.m. and said they were ready to leave the vessel in their kayaks.

According to Carter, the three on board started seeing flames and were advised to abandon the boat. A fast rescue craft and lifeboat from Ganges were called out to the fire. A Parks Canada and local vessel also responded to the mayday call.

At 11:30 a.m., the three people left the boat in their kayaks. They were picked up by the fast rescue craft and taken to Sidney.

The boat was fully engulfed from the fire and smoke was seen on Piers Island and at Swartz Bay.

WATCH: People at Swartz Bay watch smoke from a boat fire rise into the air

Small marine vessel on fire and drifting in Gulf Islands @BCFerries @CHEK_News Not a ferry – not sure what kind of vessel. Sure hope occupants managed to get clear pic.twitter.com/onzCBkaprX 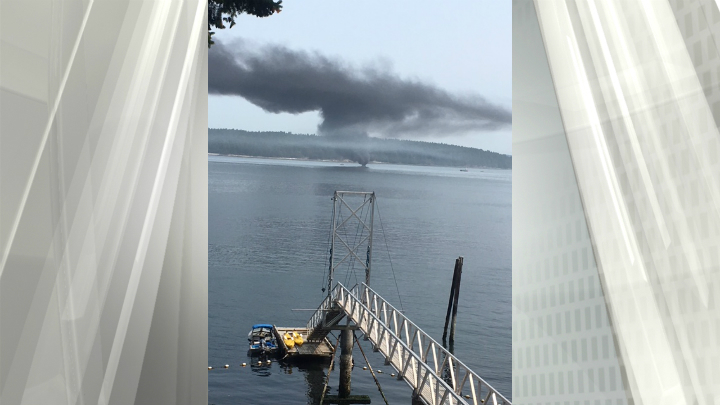 A boat on fire off Piers Island. Credit: Patti Locke-Lewkowich.

“The motor lifeboat advised that the vessel was a total loss,” Carter said.

The vessel was taken undertow by a salvage company to keep it off Piers Island. The cause of the fire is unknown at this time and the Canadian Coast Guard said it does not pose a hazard to navigation.

A coast guard crew is on site to monitor any discharge from the boat. 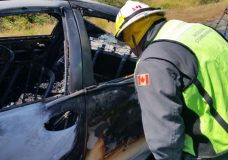 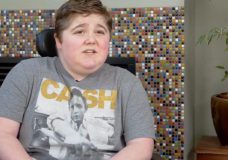