WATCH:  While some are still in the dark, others are still busy picking up the pieces after last week’s storm. Duncan was one of the hardest hit areas and a bird sanctuary there was badly damaged. As Luisa Alvarez reports, they’re now looking for community help to get back on track.

The clean up at The Raptors bird sanctuary in Duncan has been ongoing since the storm hit last Thursday.

“The worst hit was the two aviaries in the owl block where the brunt of that tree came down. That was by far the most damage the rest was some punctures on roofs and some fences broken,” said Gerard Duncan, The Raptors employee.

Staring at the aftermath of a tree falling on an owl aviary, general manager Robyn Radcliffe is just thankful everyone got out safe.

“I mean in reality we are feeling pretty positive it sucks we have to rebuild all these aviaries, its a challenge but we are all safe,” said Radcliffe.

But now several owls are displaced.

“Our birds are living in housing Its okay but its not their homes so they are not as comfortable, we want to get their homes back up cause they were designed specifically for barn owls. We give them everything they need to the best of our ability but obviously living in their own homes is better than living in someone else’s,” said Radcliffe.

Radcliffe says the re-build will be costly.

“It will probably cost five-ten thousand dollars to replace the aviaries that have just been damaged,” said Radcliffe.

And getting it done won’t be easy either since Radcliffe says working with birds can be tricky.

“We have to manage all of our people to work around our birds and what our birds want so we can’t have people around building all the time cause we have to move our birds to make sure that they are comfortable.”

But they’re determined, hopeful, and most of all thankful since the community has already been stepping up raising money through a go-fund-me-page that will go towards materials for the owl’s aviaries.

“It’s incredible especially this time of year I know money is tight so it’s amazing to see that people have not only given money but volunteers have come in to help with the cleanup,” said Duncan.

Regardless of the damage, they’re hoping to be open regular hours. Radcliffe says their mandate is to educate people through close encounters with the birds of prey and even the consequences of the storm won’t get in the way of that.

“So many raptor species aren’t doing well across the world so we are just trying to raise awareness to that and trying to get people to think about different ways that they can help protect them,” said Radcliffe.

Duncan says 70 per cent of the clean up is already finished but they are looking into having a work day to finish the rest. If anyone wants to volunteer they should email them at [email protected]

Power back for 99% of B.C. residents affected by storm 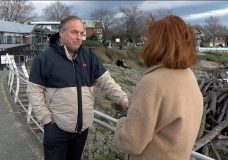