Posted: Jan. 15, 2020 5:40PM
CHEK
WatchThe biggest news concerning this latest storm is for the City of Victoria at least, there is little to report. Thousands stayed home turning Victoria into a ghost town for much of the day. Mary Griffin reports.

It was a rough start to the day for some commuters.

One driver resorted to pushing his car just to get out of the driveway on Saanich’s Orillia Street.  But other early commuters encountered a few difficulties navigating the streets.  ‘

Thousands of workers were not on the roads after taking a snow day.  Victoria police reported only two minor collisions with no injuries.   But with all the snow, clearing the roads for those still on them will take time.

“When you have a significant amount of snow, it takes a while to clear up afterwards.  So, when it’s snowing heavily like it was last night, we’re just trying to keep pace.  You can have a plow down the street and a few minutes later it’s white again,” Murphy said.

While drivers carefully navigate their way in downtown Victoria,  it’s a different story on the city’s separated bike lanes.  A bobcat outfitted with a brush cleared the bike lanes and the entrance to the Johnson Street Bridge.

But not everyone is impressed, including local business owner Brad Hendry.

“Driving down Pandora this morning at 8:30 coming to my office, I was surprised to see that from Cook Street on, the bike lanes were totally clear. And yet the street itself was full of snow. And the sidewalks were all full of snow,” Hendry said.

But Murphy says the sweeper is only for designated areas.  “The reason we can’t use that bobcat with a brush on sidewalks is, for instance, if we were clearing downtown, we would be getting too close to storefronts and the blowing snow could damage storefronts. and as well as pedestrians in the area. there is too much snow blowing around,” Murphy said. 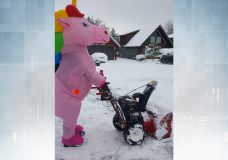 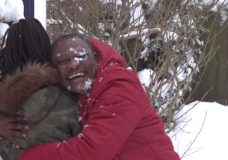