Beacon Hill Park tents should come down during the day: premier

July 28, 2020 updated
Chek
WatchB.C.'s premier wants the tents at Victoria's Beacon Hill Park to come down every morning. And he says the city is not following its own bylaws by letting them stay up. But the city says it's taking its direction from B.C.'s top doctor.

In the afternoon, the tents remain up throughout Victoria’s Beacon Hill Park.

The homeless occupants, who are staying at the park due to the COVID-19 pandemic, say they have nowhere to go, including camper Shea Smith.

“It’s really not much of a life at all. There’s no reality of any kind of peace of mind, it’s really a reality of misery,” Smith said.  And he said most campers would leave, if they could.

“We all want housing. No-one’s been offered housing.”

But B.C. Premier John Horgan said the tents should go, at least during the day. There are an estimated 100 people living in the park.

“There is a bylaw in place that says you can’t camp during the day. You have to fold up your camp in the morning. Victoria’s chosen not to enforce that. Because they believe that in a pandemic, that would be ill-advised,” Horgan said.

She said she agrees with Horgan that homeless encampments are not healthy. But the city is following the directives of the provincial health officer issued June 8 to local governments to keep encampments in place until there are indoor solutions.

“So we’ve been following Dr. Henry’s guidelines.  And you know what I agree with the premier and it was a frustrating situation and I feel for him and his government,” Helps said.

Grant McKenzie, director of communications for Our Place Society, said there is sympathy for the city’s efforts to relocate its homeless population.

“I really think that city council is doing what they can because there is no place to move people during the day. If you shut down, you know, the tents, tell people to pack up, that can lead to more problems. Because then they’re camping on boulevards and they’re camping in doorways. Then they’re trying to find any place where they can, you know, get out of the hot weather,” McKenzie said.

Smith said he and the other campers have few options. 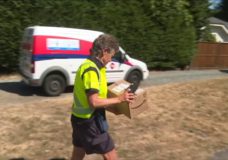