Posted: Jul. 25, 2020 6:27PM | Last Updated: Jul. 25, 2020 6:50PM
CHEK
WatchAfter some City of Victoria staff refused work after saying they were threatened while in Beacon Hill Park, some campers say a small group is causing issues. They also say that tensions are rising as time drags on, and as they are constantly moved. Julian Kolsut has this story.

But they also say the incident may have been a result of rising frustrations.

“I think it is due to a lot of pressure, based on bylaw basically talking about the environmentally sensitive areas, pushing people around, displacing people,” said Shea Smith, one of the campers.

“Even though we are allowed to camp 24/7, we are still getting a lot of the pressure.”

The city said in a statement Friday that two Parks employees were confronted by someone in Beacon Hill Park who made threatening remarks about harming them and members of the public. The two left the area and dialed 911.

A group of Parks staff has exercised their right to refuse certain work duties. The city is investigating the incident and says they are working with the worker’s union.

Smith says he and other Beacon Hill campers are upset about the incident.

“Dismay at first, I was upset to hear that was even happening because we really try to promote this as a peaceful area,” he said.

But some neighbours and visitors are growing more and more frustrated. A petition started over a month ago citing issues like violence, drug use,  human waste and harassment has amassed Over 20,000 signatures.

The city added that The COVID-19 pandemic has increased confrontations like the ones their staff faced “as a higher volume of individuals are sheltering in parks. That’s why we have been using a Hazard Risk Assessment that outlines controls intended to keep workers safe, which is reviewed and updated weekly.”

The mayor said in the statement that “The City continues to advocate for more investment in housing and mental health supports from the provincial and federal government agencies responsible for these urgent community priorities.”

Advocates say provincial and federal efforts to house those sheltering in the park have slowed significantly, and that some of the frustration may be rising as time drags on.

“After getting so much news in a hurry in early April, It was hundreds who were housed all at one or over weeks and but now the rest are waiting and they are kind of being pushed around and there is no-where for them to go,” said Fred Cameron of SOLID Outreach.

Fred says there are big concerns about what the situation will look like as summer ends and a potential second wave of this pandemic approaches.

“Winter gets ugly in a hurry, so if we don’t have people housed in a long term facility, it’s going to be disastrous.”

As tensions rise between neighbours and visitors to the park, Smith started a podcast to help try to bridge the divide.

“We have had a positive response to the podcast, it helps people understand a little more what’s going on and what’s happening,” he said.

His Podcast “The HOMELESS IDEA” is described as a”view into the everyday events, and insights of a Homeless individual in today’s society.”

“We are getting a lot of bad media and negative media surrounding this whole thing, and that’s just one side of the story,” Smith added.

He hopes soon his recording booth, won’t be in his tent in Beacon Hill Park.

City of Victoria Staff and Mayor Helps were unavailable for an on-camera interview Saturday for this story. CUPE LOCAL 50 did not respond to a request for comment. 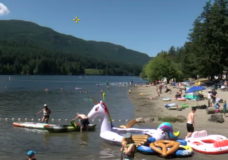