A BC Ferries ship came to the rescue of a sinking ship in bad weather near Moresby Island Monday evening.

Responding to a mayday call, a BC Ferries vessel rushed to help a boater in bad weather.

The 24-foot vessel was sinking around 6:30 p.m. near Morseby Island, not far from Swartz Bay.

The crew of the Coastal Celebration was nearby and was able to rescue the boater.

Witnesses say only the tip of the boat’s hull was still out of the water when the ferry arrived on scene.

“It was going down and people were wondering if the Coast Guard would possibly get there in time,” explains witness Robin Junger, who was on board the ferry at the time.

“You could see the waves were terrible, it was horrible conditions, and the BC Ferries guys saved this guy literally seconds before it sank. It was incredible, it was really incredible. It takes a lot of guts and I hope people appreciate what they did.”

A spokesperson for BC Ferries says no one was injured in the incident.

“Our crew was able to rescue the boater and it ended up being our last sailing of the day,” says BC Ferries spokesperson Deb Marshall.

Weather conditions were so bad, BC Ferries say the 7 p.m. and 9 p.m. sailings from Swartz Bay to Tsawwassen had to be cancelled as well as the final sailing from Duke Point to Tsawwassen.

Wind warnings were in effect for Greater Victoria and other parts of Vancouver Island on Monday as a series of storms continues to hammer the B.C. south coast. 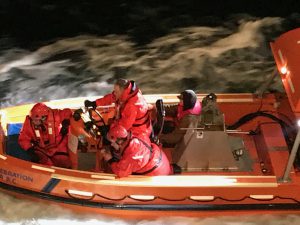 Photo by Robin Junger of BC Ferries rescue near Moresby Island 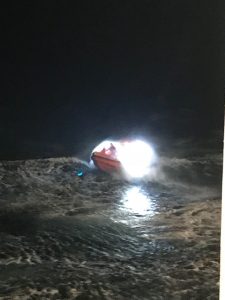 Photo by Robin Junger of BC Ferries rescue near Moresby Island. 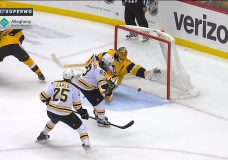 CHEK Sports Plays of the Week 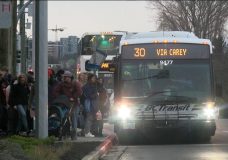 Police looking for suspect after bus stop attack in Saanich