May 3, 2021 updated
CHEK News
British Columbia health officials have reported 2,174 new cases and 15 deaths from COVID-19 since their last update on April 30.

British Columbia health officials have reported 2,174 new cases and 15 deaths from COVID-19 since their last update on April 30.

Officials also announced that one of the deaths over the weekend was someone on Vancouver Island.

Of the new cases, 438 were recorded in Vancouver Coastal Health, 1,509 were in Fraser Health, 61 in Island Health, 106 in Interior Health, and 60 in Northern Health.

There are currently active 7,327 cases in the province, 474 people in hospital — 176 of whom are in intensive care — and 11,781 people under active public health monitoring due to possible exposure to an identified case.

A total of 122,518 people in B.C. have recovered from COVID-19 while more than 1.87 million doses of vaccine have been administered province-wide.

During Monday’s live update, Dr. Bonnie Henry, the provincial health officer, said everyone 18 or older in B.C. can now register to book their COVID-19 vaccine appointment. She also announced that more than one million doses of vaccine are slated to arrive in the province this month, meaning more needles in people’s arms.

“We have reached a new and encouraging point in this vaccine supply, starting today the vaccine that we will be receiving will be increasing significantly. In the month of May, we will be receiving over a million doses of vaccine, available for people across the province. This is good news for all of us,” she said.

Henry also said the province is mulling over the idea of decreasing the interval between first and second dose to less than 16 weeks for more people. She also said the goal is to get everyone their first dose by Canada Day, though there could be some hiccups along the way.

“In some ways, we have been building a spaceship as we’ve been flying it and now we are entering into a new era, a new warp speed if you will and there are bound to be bumps along the way, and we will adjust,” she said, later adding. “We will take care of those glitches.”

B.C.’s top doctor also mentioned on Monday that while the province’s daily infection tally is high, it has been slowly decreasing in the past few weeks. She likened the way transmissions of the virus occur to a road with “many many” forks.

“It is like a path with many many forks in the road,” said Henry. “In some cases, it is one person who transmits to one other person and that goes on and in some cases with this virus, we know that it can be a situation where one person transmits to many others. We know there are certain situations, certain environmental conditions that make that more likely.”

Henry said the latter, which she called superspreader events where one person infects multiple people, seems to occur more frequently and is the reason why officials have been focused on reducing those types of situations. However, she said while cases had been rising, they appear to be coming down and that British Columbians need to continue following rules to prevent more transmissions.

“It’s going to be a while before we no longer see new cases, but we need to keep doing our bit to stop those chains of transmission and stop the chance that it is going to spread to large numbers of people,” she said. “The things we are doing are making a difference and we need to hold the line and keeping that for the next few weeks. We don’t want another upward climb.”

There are currently 265 active cases on Vancouver Island, according to data available on the BCCDC’s dashboard.

Active cases are now at their lowest level since mid-March.

Fifteen people are currently hospitalized due to the coronavirus, five of whom are in critical care. It’s worth noting also that hospitalizations on the Island have decreased by roughly 45 per cent over the past week.

A total of 604 new COVID tests have been performed in the past 24 hours while 14,352 doses have been administered since the province’s last update on April 30.

There have been 4,726 cases reported, 38 deaths, 229 total hospitalizations, and 4,416 recoveries on Vancouver Island.

Nearly 300,000 doses of vaccine have been administered on Vancouver Island, with the majority of them being first doses.

Of those active cases, 111 are in the South Island, 83 are in Central Island, and 18 are in the North Island.

Family with child flees after man pulls knife on them at Beacon Hill Park, police say 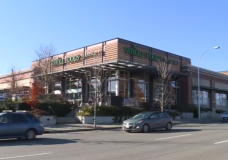