New COVID-19 modelling data released Thursday shows the majority of cases on Vancouver Island since the pandemic began have been in the northern part of the island.

As part of the modelling released Thursday, COVID-19 numbers were shown by health-service delivery area, indicating COVID-19 is all over the province. The last 14 days have seen low levels in most parts of the province, with hotspots in Fraser Health linked to workplace outbreaks. 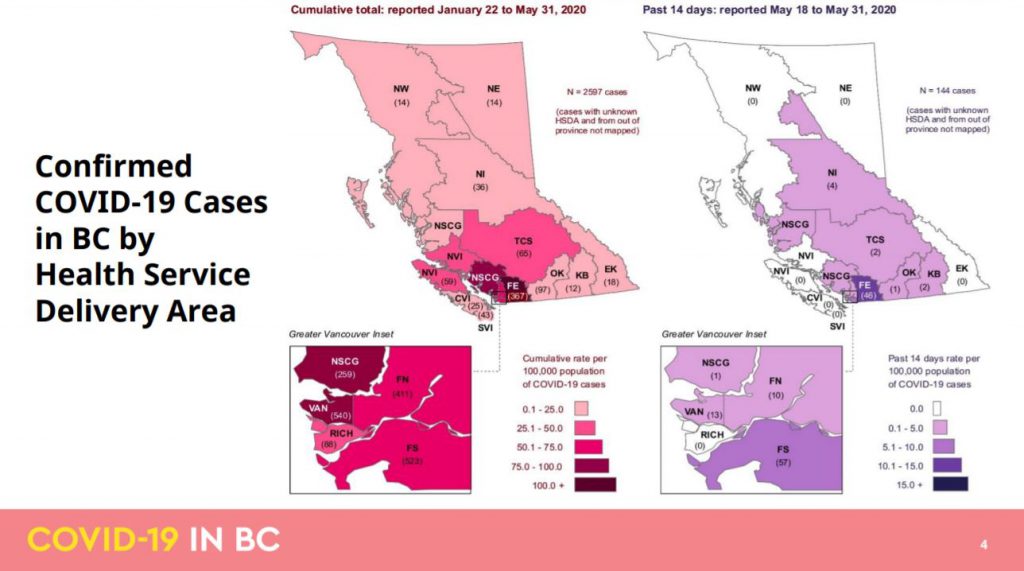 British Columbia Provincial Health Officer Dr. Bonnie Henry says B.C. has been successful in flattening the COVID-19 curve but says relaxing physically distancing too much could result in a rapid rebound in transmission. 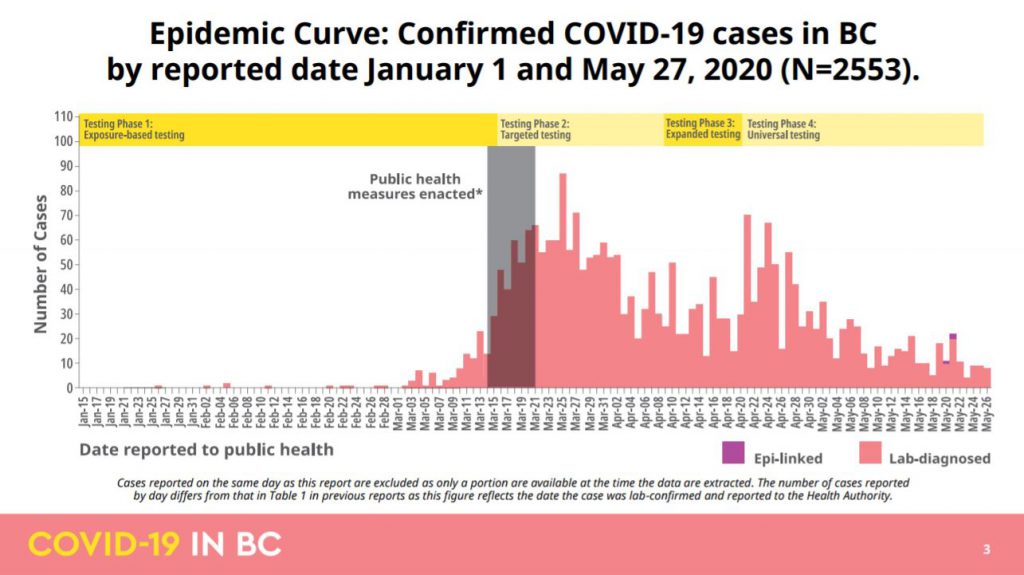 Henry said the new data tracking the path of COVID-19 since early January indicates B.C. continues to keep the COVID-19 curve flat after clusters of cases in mid-March, with measures like physically distancing and self-isolation when ill.

“We remain around 30 per cent to 40 per cent of our pre COVID contacts. And that’s what we want to stay at. We want to stay somewhere around 50 to 60 per cent. And we know that if we do that, we’re likely to have low numbers of cases over time and not to have any exponential growth in our trajectory here in B.C.,” Henry said.

Henry announced Thursday there were five new test positive cases of COVID-19 in B.C. She also said there were four new epidemiologically linked cases: three in Island Health and one in Vancouver Coastal Health.

“Epidemiologically linked cases are cases where somebody is a close contact of a person who has tested positive for COVID-19,” Henry said, adding that the linked case will not have been tested.

The four cases have been found since May 19 and Henry said all four have recovered.

She added there are numerous reasons that people may not have had a COVID-19 case confirmed, such as no access to testing, mild symptoms, or that it may be at the end of their illness.

Henry said there are expected to be more epidemiological cases but there won’t be too many as testing is available to everyone. However, the B.C. government will be looking at serology testing in the future.

She also said this indicates the risk is still out there and the impact is much broader than people who test positive. Henry said once people are exposed to the virus, there’s no way to prevent someone from getting sick.

There have now been 2,632 COVID-19 cases in B.C., including the four epi-linked ones. Twenty-six are in hospital. The only person who was hospitalized in Island Health has been discharged.

There have been no new deaths in the last 24 hours and 2,265 people have recovered.

Of the cases since the pandemic began, 908 have been in Vancouver Coastal Health, 1,334 in Fraser Health, 130 cases in Island Health, 195 in Interior Health and 64 in Northern Health.

Henry said as B.C. started Phase 2 of the province’s restart plan on May 19, mobility among British Columbians has increased. Park usage has gone up significantly but others have remained relatively flat. 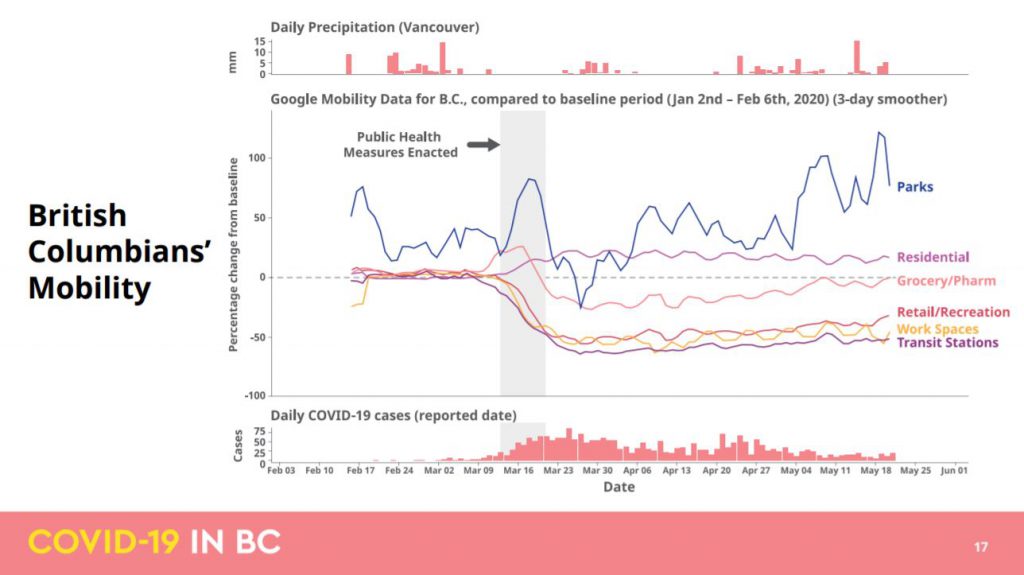 She said the province is where it wants to be in terms of minimization but too much relaxation of physical distancing can lead to a rapid increase, emphasizing the importance of “small numbers in big spaces.” 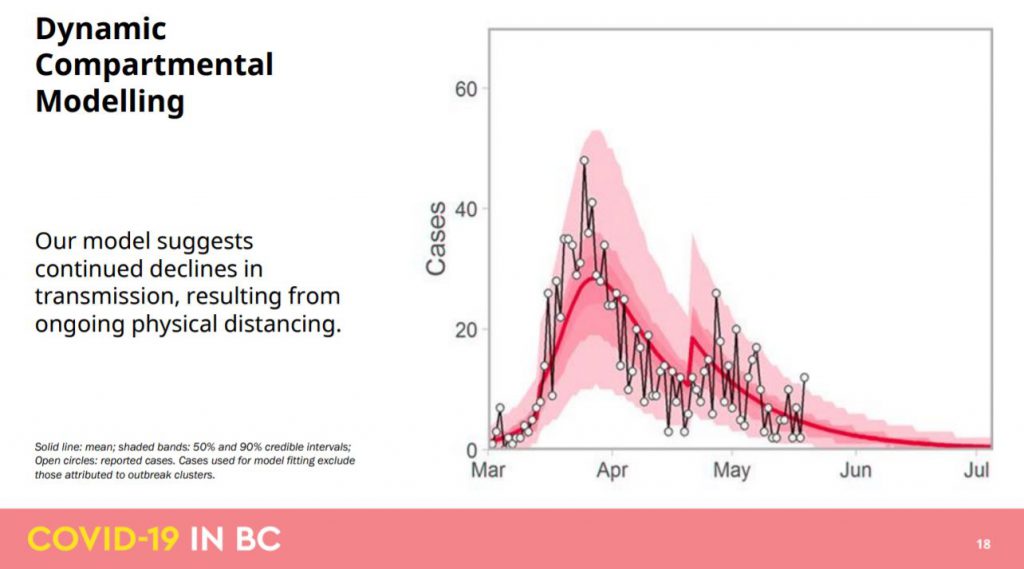 Modelling showing a decline in transmission in B.C. due to ongoing physical distancing. (B.C. government) 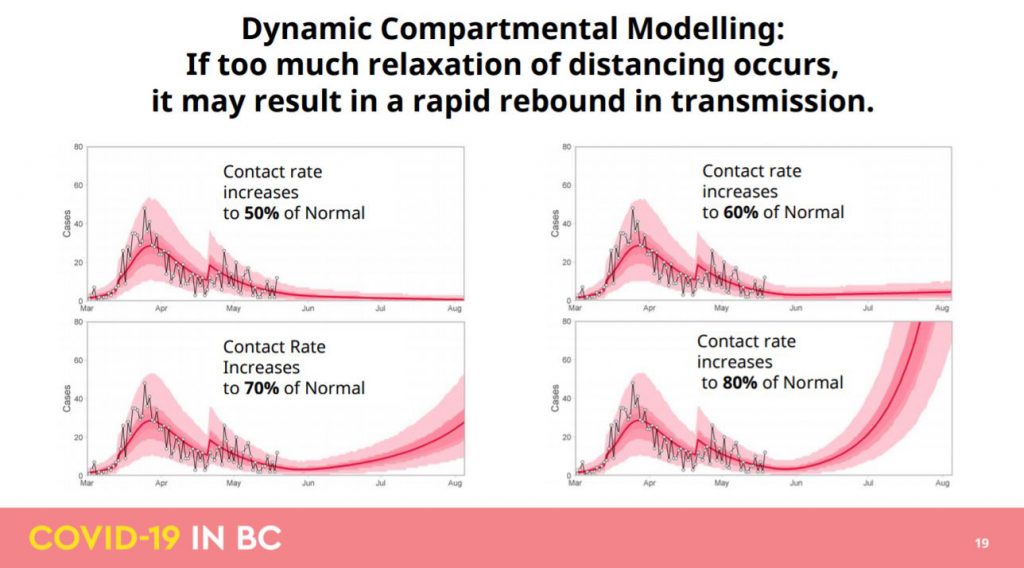 Modelling in B.C. showing what would happen if too much relaxation of physical distancing occurs. (B.C. government)

Students started returning to school this week and the easing of some health restrictions last month allowed the reopening of restaurants, hair salons and personal services, including dentists and physiotherapists.

Henry said if numbers continue to be low in the next week or week and a half, the province could be moving into Phase 3 of the restart plan. However, she cautioned that there have been workplace outbreaks, although the latest ones have been identified early.

Henry warns it’s important now is to keep the number of contacts low and safe before she gives the go-ahead for travel.  “We are very hopeful that we’ll be moving into the next phase come the middle of June, into July. I am hoping myself to be able to travel myself, and looking at booking into July,” Henry said.

That’s something the tourism industry is waiting to hear, according to Destination Greater Victoria CEO, Paul Nursey.

“What we’ve been finding is reservations have been doing nothing but cancel. And we need to get that moving in the other direction. So, we’re quite excited to, hopefully, hit the re-start button in the weeks ahead,” Nursey said.

In anticipation of a reopening to Phase three, BC Ferries is slowly ramping up its schedule, with more sailings from Nanaimo to the mainland announced this week. And beginning next week, there will be more sailings to the southern Gulf Islands. But reservations are recommended with passenger capacity reduced to 50 per cent.

Henry also said Thursday health officials know children are less likely to get infected by COVID-19. Even if they had the same risk as adults, opening schools will have minimal impact on transmission as long as the current measures remain in place. 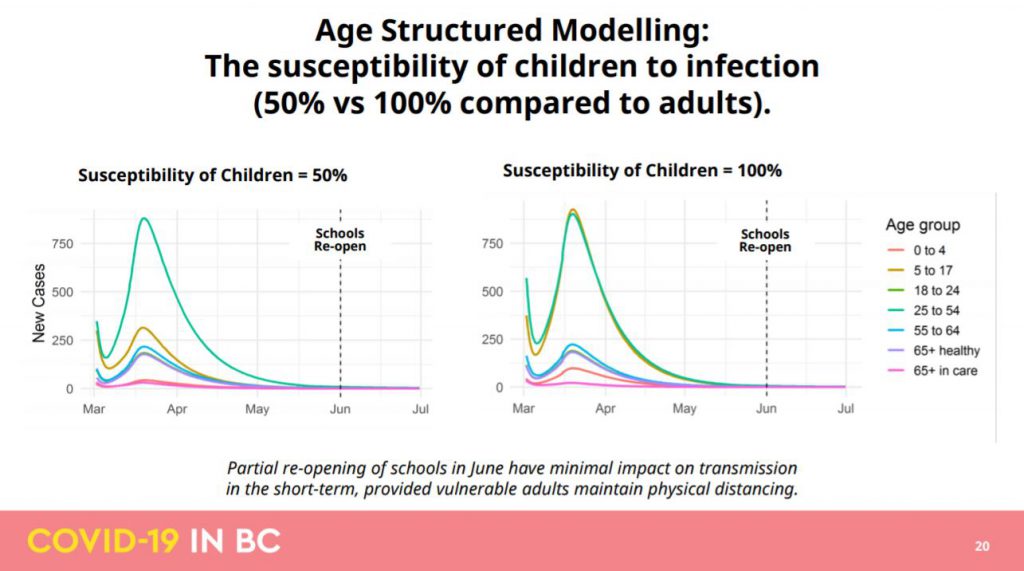 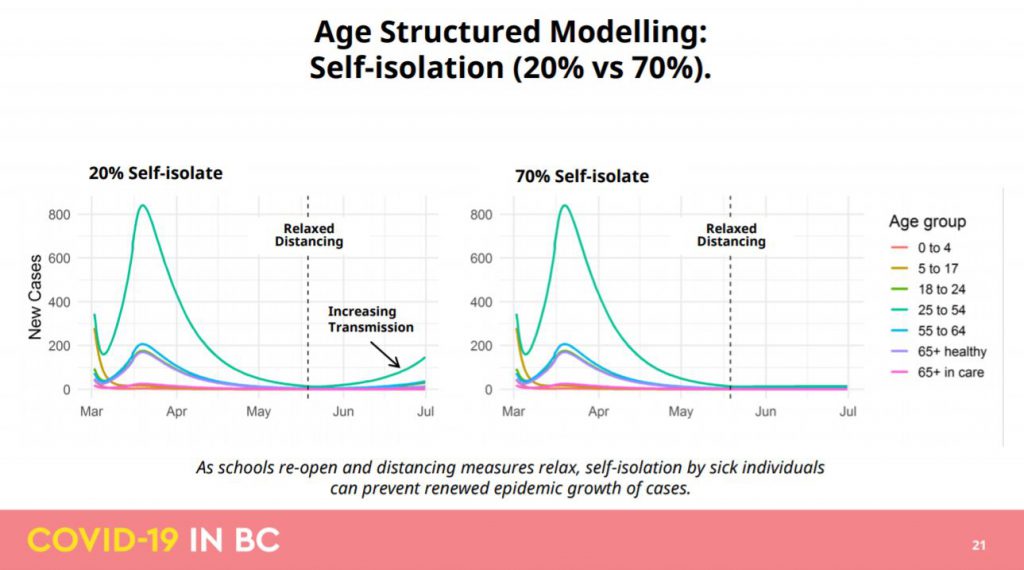 As for who is being affected, Henry said the majority of COVID-19 cases are between the age of 30 to 60. However, hospitalizations are more likely to be people in their 70s, with people over the age of 80 more likely to die from COVID-19. 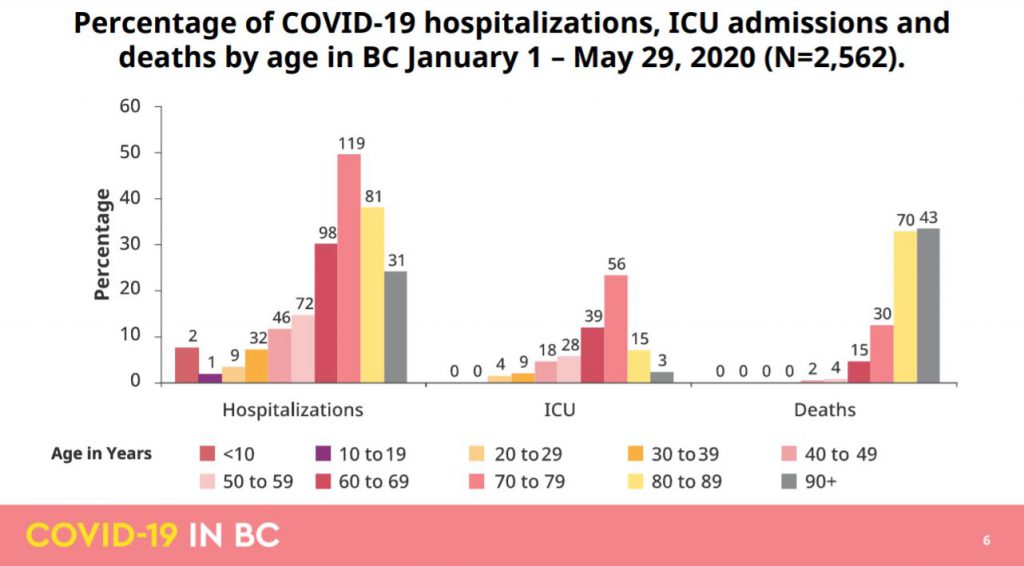 There are slightly more COVID-19 cases among women in B.C. then men, but men are more likely to need hospitalization or intensive care for treatment. Henry said overall in Canada, there may be more female hospitalizations, which likely reflect the higher number of woman in long-term care. 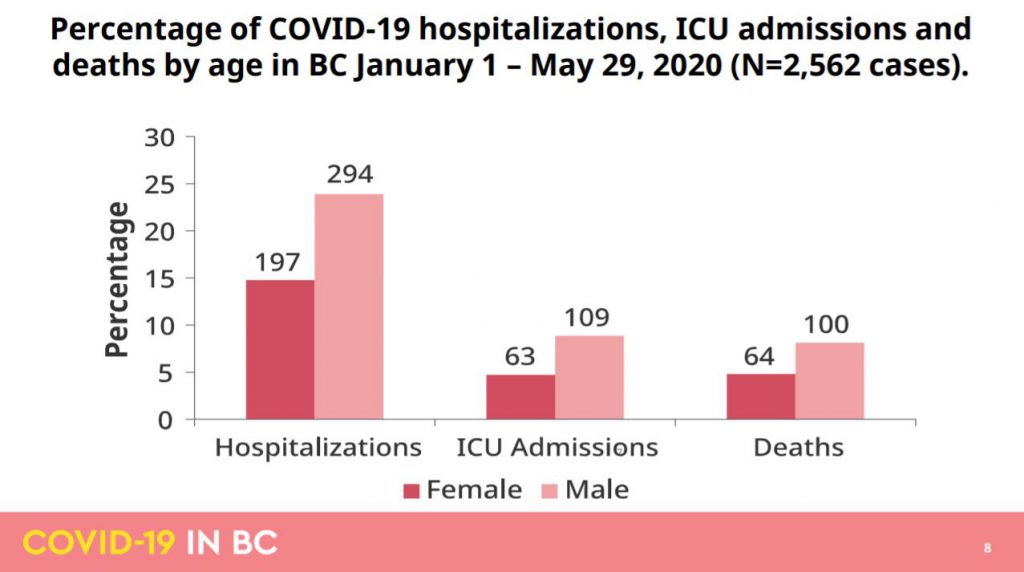 Hospitalizations of COVID-19 by gender in British Columbia. (B.C. government)

Henry said people have had an average of 10.7 contacts prior to March 15, when B.C. declared a public health emergency and 3.6 contacts since. 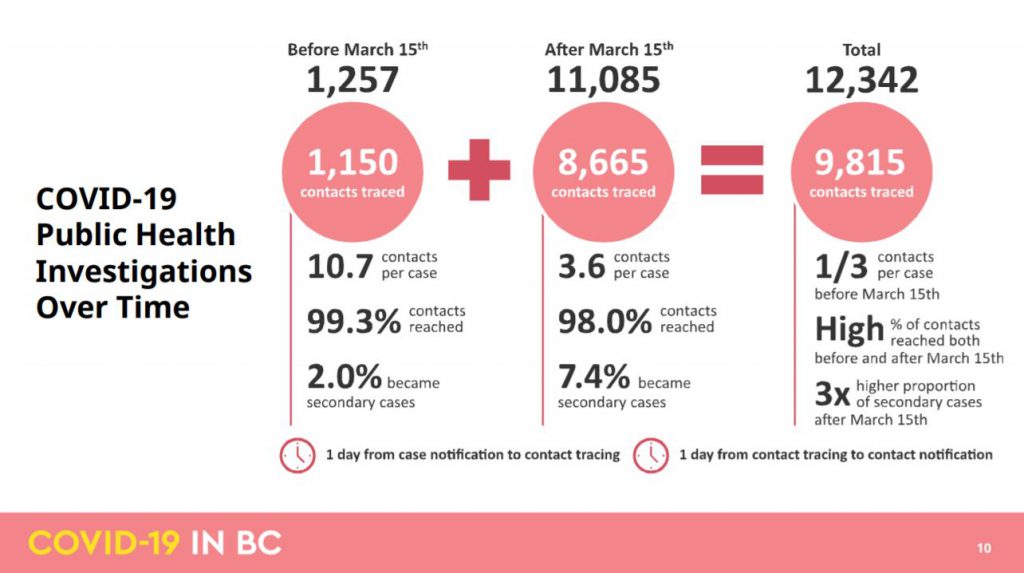 B.C. Health Minister Adrian Dix and Henry also released a look at genome sequencing of COVID-19 in B.C., to trace where cases were picked up. The samples are from about a third of the cases.

The first cases were from China, then Iran, followed by a surge of European-like/Eastern Canada cases stemming from the Vancouver dental conference outbreak.

In March, the strains from Eastern Canada and Europe spiked dramatically. Strains traced to Washington state have also been linked to a large number of cases, particularly in long-term care homes in the Vancouver Coastal Health region. 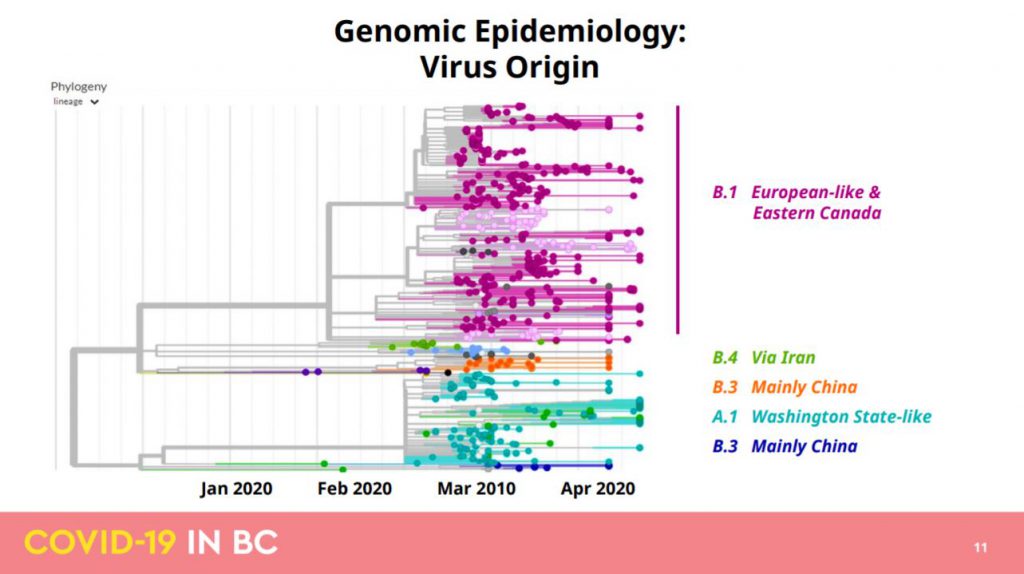 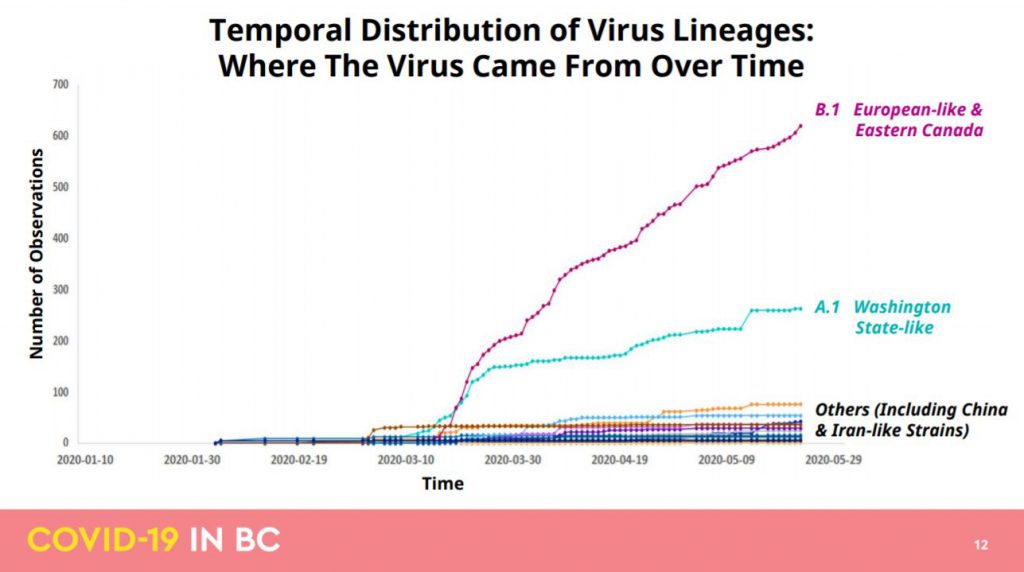 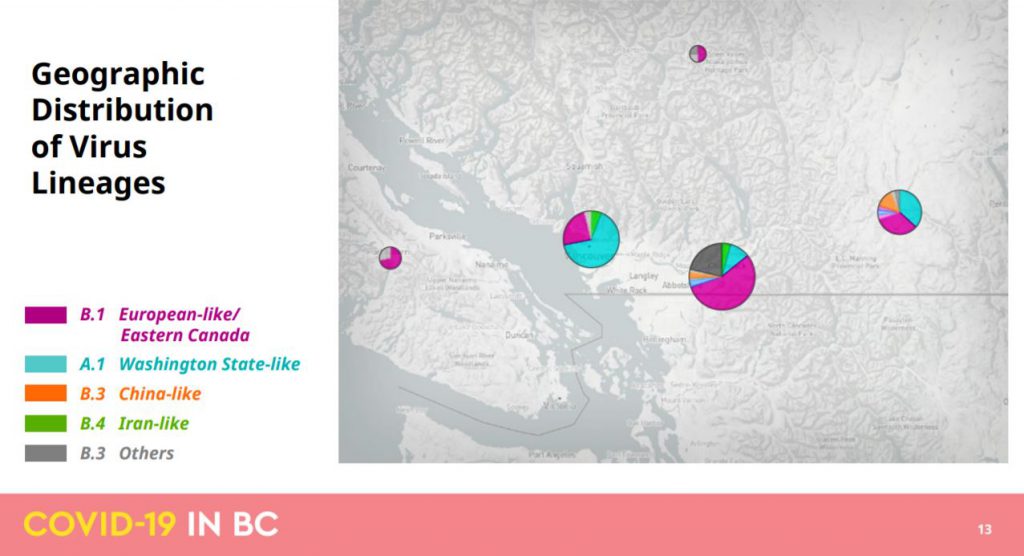 Earlier Thursday, Canada’s top doctor, Dr. Theresa Tam, released a new report on the novel coronavirus in Canada Thursday, including new short-term projections that say between 157 and 1,857 more Canadians could die of COVID-19 in the next 11 days.

The projections, based on recent trends, estimate in the best-case scenario at least another 4,459 people will be diagnosed with COVID-19 by June 15, and in the worst-case scenario there will be more than 14,000 new cases by then. What happens depends almost entirely on how well Canadians practise proper public health behaviours, and how good health systems are at testing, contact tracing and isolating positive cases.

“Without a vaccine or treatment, public health measures remain essential to control the epidemic,” said Tam.

Canada has been averaging just under 800 new cases a day for the last week, down from an average of 1,050 new cases the week before that.

Tam said most of the country has seen spread of the disease diminish substantially but there remain hot spots of community transmission in Toronto and Montreal that are concerning. In the last two weeks, Ontario and Quebec accounted for 90 per cent of new cases, and most of those were in those two cities.

Tam said the efforts Canada has made, including physical distancing and closures of businesses and public spaces, have allowed us to flatten the curve, but we can’t get cocky and think the worst is over so we can get back to normal now.

“Resurgence can actually occur at any time over the course of the outbreak depending on what we’re doing on the ground,” she said. “We mustn’t forget that.”

As of Thursday morning, Tam said, Canada has had 93,441 positive cases and 7,543 deaths. She said about 16 per cent of patients required hospitalization and three per cent needed to be admitted to intensive care.

The eight per cent death rate reflects the number of outbreaks in long-term-care homes – more than 80 per cent of patients who died are connected to long term care homes or seniors’ residences. But Tam said the rate must be viewed knowing the overall number of people who have had COVID-19 is not yet known, because lab-confirmed cases are “just the tip of the iceberg.”

Plans to test Canadians for antibodies to detect whether they have had the novel coronavirus will give a better sense of the true number of cases, Tam said.

The modelling also shows Canada has successfully reduced the reproductive rate _ the number of additional people infected by a single person with COVID-19. This virus is highly infectious and in some parts of the world the rate was as high as five, meaning every person getting COVID-19 was passing it on to five more people.

In Canada, the rate peaked at just more than two, but the numbers show that began to decline sharply in the last week of March when the country went into strict lockdown in almost every province. Tam said the rate needs to be consistently below one for more than three weeks to be sure public health measures are working.

It has been below one most of the time since the beginning of May but the hotspots of community transmission in Toronto and Montreal are exceptions, said Tam.

Overall, the report says, with a high degree of physical distancing and case testing and tracing, Canadians can expect that the number of new cases will stay very low, including no real second wave in the fall.

With weaker controls, a surge of cases could see half of Canadians infected, with a rising number of cases throughout the summer and into next winter.

With no controls at all, as many as 80 per cent of Canadians will get infected by the end of the summer.

Prime Minister Justin Trudeau said earlier Wednesday he is encouraged by the overall trends in Canada but warned the country is not out of the woods.

Clusters of cases of COVID-19 have disproportionately affected institutional settings including long-term care homes, hospitals, prisons and meat plants. Canada’s largest single outbreak is linked to the Cargill meat-processing plant in Alberta, with 1,560 cases including workers, their family members and others in their communities.

Researchers with Johns Hopkins University and Medicine say the number of confirmed cases of COVID-19 cases worldwide is more than 6.5 million, with over 388,000 deaths.

With files from Mia Rabson, The Canadian Press 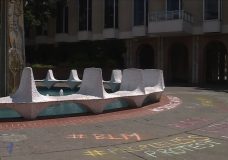 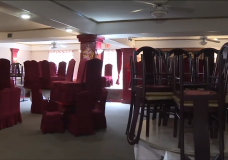 Several Victoria restaurants up for sale as pandemic takes its toll