December 15, 2020 updated
Province of BC
B.C. Premier John Horgan is scheduled to address the province on Tuesday in order to provide an update on the current COVID-19 situation.

B.C. plans to step up enforcement of public health orders.

During a press conference on Tuesday afternoon, Premier John Horgan announced that the province will be “beefing up” enforcement of its recent public health orders.

“This is serious, this is not a lark, this is not something we do lightly,” he said. “Those who do not want to obey the rules that the rest of us are following will have to pay the consequences.”

Horgan explained that although the majority of British Columbians are following public health orders, there remains a handful of those who continue to “bend” the rules and that they must be held accountable.

“That means ensuring the fines that we levy are collected. Certainly, everyone has a right to appeal, a right to due process, but once that due process has been finalized, if you do not pay the fines we will send collections after you,” he said.

The premier’s comments come after a handful of churches continue to congregate despite public health orders introduced in November banning all in-person faith-related gatherings.

Those orders also banned other types of events and gatherings, and restricted people’s ability to socialize with others outside their immediate household.

Horgan stressed that COVID-19 restrictions have British Columbians safe “relative” to those in neighbouring Washington state and Alberta and pleaded with everyone to continue following them.

“I want you to recognize and understand that your actions can not just save your family members, but they could save other people’s family members,” he said. “It is not too much to ask and if you’re not prepared to follow the rules and if you’re going to look for loopholes, there will be consequences for that.”

Hope is on the horizon in 2021 with COVID-19 vaccines now in British Columbia, but only if people continue to abide by the “simple” rules, particularly during the holiday season, said Horgan.

“Keep your distance from other people, keep your bubbles very very tight over the holiday season,” he said. “Do not interact with people you normally don’t interact with and of course, if you’re in a public place, wear a mask.”

Since B.C. introduced the COVID-19 Related Measures Act, which allows law enforcement to issue fines to those who violate public health orders during the pandemic, more than 190 tickets have been issued. 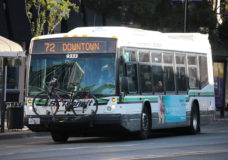