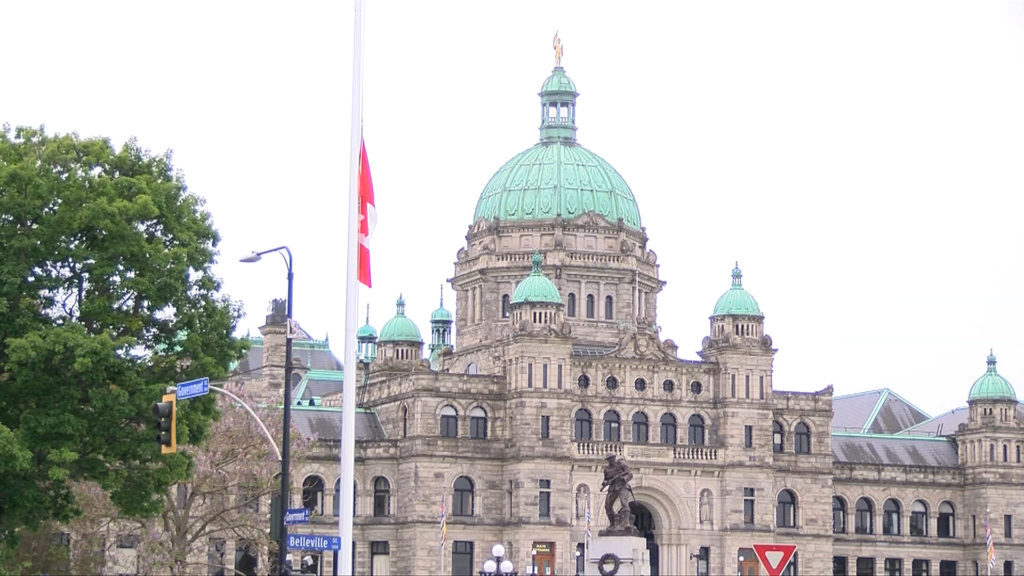 Flags on some government buildings on Vancouver Island have been lowered in honour of the more than 200 children found in a mass grave at the Kamloops Indian Residential School.

The B.C. Legislature announced on social media Sunday that the Canadian flag will be flying at half-mast until further notice in order to honour “every child whose life was tragically taken” at the Kamloops facility.

“This half-masting is also in memory of the thousands of children who were sent to residential schools, for those who never returned, and in honour of the families whose lives were forever changed by the Indian residential school system,” the B.C. Legislature later said on social media.

Prime Minister Justin Trudeau also announced Sunday that flags on all federal government buildings as well as the Peace Tower flag will be flown at half-mast.

“To honour the 215 children whose lives were taken at the former Kamloops residential school and all Indigenous children who never made it home, the survivors, and their families, I have asked that the Peace Tower flag and flags on all federal buildings be flown at half-mast,” Trudeau said in a statement.

Elsewhere on Vancouver Island, the Empress Hotel’s flag was seen at half-mast while School District 68 said flags at all the schools in Nanaimo-Ladysmith will be lowered.

The City of Nanaimo has said flags at their municipal facilities will fly at half-mast as well.

“We stand united in grief with our Indigenous friends and neighbours all across the country to honour the lives of those children, their families, survivors and all children who never made it home from this dark chapter of our history,” Nanaimo Mayor Leonard Krog said in a statement issued Sunday.

Meanwhile, the City of Victoria issued a press release Sunday afternoon stating that flags will be lowered for 215 hours starting — one hour for each victim — starting Monday.

“The flags will remain lowered from May 31 to June 8 for a total of 215 hours, one hour for each of the children who died. Council will also observe a moment of silence at the beginning of its meeting on Thursday,” said Mayor Lisa Helps in a statement.

Yesterday, Central Saanich said flags at their municipal hall, police and fire stations will be at half-mast for 215 hours — one hour for each victim.

Numerous cities around the country including Vancouver, Toronto, Ottawa, Halifax as well as Mississauga, Brampton and Burlington, Ont., have also lowered their flags.

It all comes after the remains of 215 children were found in a mass grave at the Kamloops Indian Residential School, which operated from the 1890s until the late 1970s, earlier this month.

According to the National Truth and Reconciliation Commission, at least 51 children have died at the school from 1915 until 1963.

Researchers at the National Centre for Truth and Reconciliation have been able to confirm 2,800 names of children who died in residential schools nationwide — though experts believe there are thousands more unnamed children.

For many residential school survivors, like Sxwithul’txw, who was just five years old when he was ripped from his family in Duncan during the 1970s, the discovery of the mass grave in Kamloops is re-traumatizing, but not surprising.

“We know, and the elders know, some of our lost and missing children are in the ground somewhere,” Sxwithul’txw told CHEK News on Friday, referring specifically to the grounds of Kuper Residential School.

“And as we continue these investigations across Canada at various location sites of these residential schools, we’re going to be hearing more of these events, and about these lost souls.”

The British Columbia Coroners Service is investigating the mass grave and the Royal BC Museum is looking for records that may have documented the children’s deaths.

With files from Kori Sidaway/CHEK News and The Canadian Press

The #BCLeg Canadian flag has been lowered to half-mast until further notice, following the discovery of the remains of 215 children in a mass grave at the Kamloops Indian Residential School, to honour every child whose life was tragically taken. pic.twitter.com/QxQZfrk15S

As we prepare to commemorate National Indigenous Month, we are reminded of Canada’s dark history, that of the residential school system. Last week, the bodies of 215 children were found at the Kamloops Indian Residential School. 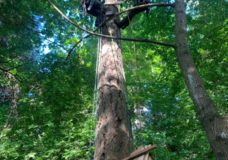 Barred owl box installed at Esquimalt park to provide habitat
Grizzly believed to have killed woman captured, will be euthanized