B.C. to drop capacity limits for indoor events on Oct. 25

Current capacity limits at indoor events and other settings in British Columbia are about to be dropped.

Capacity restrictions will be dropped one day after the second stage of the vaccination card system comes into effect, which requires individuals to have had two doses of vaccine in order to access various settings and events.

“We’re hoping to leverage the benefits of the vaccine card and this is an important first step of that and we will be monitoring carefully and looking at whether we can take away additional restrictions depending on how things evolve over the next few weeks,” said the province’s provincial health officer, Dr. Bonnie Henry, during a press conference Tuesday.

The requirement that individuals must remain seated at pubs and restaurants will also be lifted on Oct. 25 in order to “allow for a little bit more freedom” of movement.

“I will remind people, of course, that the other public health restrictions remain in place, including the indoor mask requirement when you’re moving about,” said Henry.

However, capacity limits remain in effect where regional orders are in place, including Fraser East and parts of Northern and Interior Health regions.

The provincial health order restricting capacity limits to 50 per cent for inside organized events and gatherings has been in place for months here in British Columbia.

Henry, during Tuesday’s press conference, also touched on COVID-19 cases in schools and school-aged children, saying they are on the decline.

“As case rates come down across the board, we have also, thankfully, seen a dramatic drop in case rates in school-age children,” said Henry, later adding.

“We’ve seen a decrease in young children and school-age children across B.C. but particularly this has been pronounced in Interior Health and Northern Health, where we saw the biggest increases.”

A chart showing the decline of infections in various population brackets in the province. (BC Government)

Not according to our inbox. https://t.co/TdyERMfB0H

A previous version of this story is below.

B.C. health officials are scheduled to provide a live COVID-19 update to the province on Tuesday afternoon, following a weekend that saw 26 deaths from the virus.

Dr. Bonnie Henry and Health Minister Adrian Dix are slated to deliver the live press conference at 1:30 p.m. A live stream will be available on this page, as well as the CHEK+ app.

In a media release issued Monday, it was reported that there had been 1,846 new COVID-19 cases over the weekend, including 169 cases linked to Island Health, and 26 deaths since their last update on Oct. 15.

Three of the new deaths recorded over the weekend were in the Island Health region.

Also on Monday, it was announced that Pfizer had officially submitted a request to Health Canada in order to approve the first COVID-19 vaccine for children aged five to 11 years old.

As soon as the regulator gives the green light, providers will be able to start offering the COVID-19 shot to kids, though new child-sized doses might need to be procured.

The doses are about one-third the size given to adults and teens age 12 and up.

It is expected that health officials will address vaccines in younger children during today’s press conference. 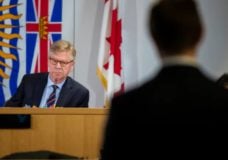 Lawyers say they should be excluded from money laundering policies in B.C. 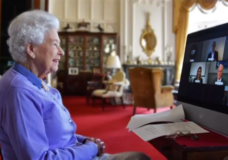 Thanks but no: Queen turns down 'Oldie of the Year' title