As COVID-19 restrictions begin to lift in B.C., restaurants are opening and people are returning to public venues.

The gradual opening and changes show that B.C. is leading the country in terms of full-time jobs for the month of May.

The latest job numbers from Statistics Canada show B.C. lost more than 23,000 part-time jobs in May but picked up 21,000 full-time positions.

B.C.’s unemployment rate of 7 per cent is also well below the national average of 8.2 per cent.

The issue for some restaurants is getting enough part-time workers for the restaurant jobs.

Gudgeon hopes to hire more workers in the near future as she’d normally have at least 70 employees on staff heading into this time of year.

“We’re still at about 60 per cent capacity I believe where we were pre-pandemic,” she said.

The Greater Victoria Chamber of Commerce says the lower unemployment rates in B.C. add to a pre-existing issue in the province.

“Even before the pandemic, we had a worker crisis. We had a situation here where we had the lowest unemployment rate in the country,” said Bruce Williams, CEO of the Greater Victoria Chamber of Commerce. “We had employers that were looking for workers, but couldn’t find them. That meant reduced capacity in their ability to be all they wanted to be. That’s still the case right now.”

Other industries are feeling the employee strain as well. The construction industry struggled to find skilled tradespeople before the pandemic and it’s continued to be an ongoing issue and the tourism industry is gearing up for a reopening of the province but it’s competing for workers too.

“I think, for the most part, our membership will be intact though and everybody will be great coming out the other end of this,” Williams said.

As restrictions ease, the hope is the employment crunch will also ease, with more business activity throughout the region. 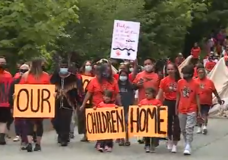 'We're asking for a little respect': Tsawout First Nation holds vigil in Saanich for residential school victims one week since discovery of remains