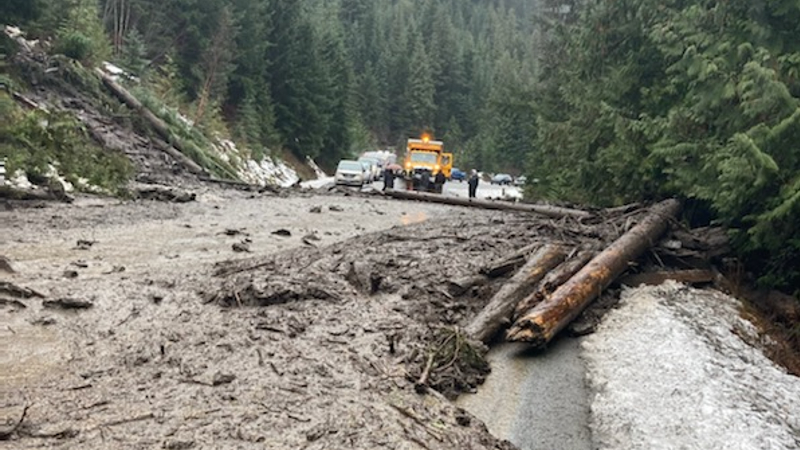 Ministry of Transportation
A mudslide killed a woman and shut down part of Highway 99 last week.

Southern British Columbians braced for another severe storm Saturday, with a new set of evacuation alerts issued and officials in an already devastated agricultural community warning of another possible river overflow.

The province closed Highway 3 between Hope and Princeton, and Highway 1 in the Fraser Canyon and between Popkum and Hope at 2 p.m. Saturday.

Highway 99 between Pemberton and Lillooet closed at 4 p.m.

Transportation BC confirmed that the Malahat on Vancouver Island was not included in the set of closures, but that DriveBC would be updated if the highway was impacted.

Hi Heather – not these set of closures, no.
Info Here: https://t.co/HsL4zQs7AO
If anything changes for the #Malahat, @DriveBC will be updated.
Safe travels.

Abbotsford Mayor Henry Braun told a news conference Saturday that the city has done everything it can with provincial and federal support to prepare, but the Nooksack River in Washington state presented an “unknown factor.”

The river’s dikes in Whatcom County were damaged in recent flooding and it’s unknown exactly how much of Sunday’s anticipated spillover the saturated land could absorb, Braun said.

“The rain we can handle, I’m pretty confident of that. What we can’t handle is if the Nooksack overflows and starts emptying again into Sumas Prairie,” he said.

The mayor said he impressed the importance of supporting critical diking and drainage infrastructure when he met Friday with Prime Minister Justin Trudeau and Premier John Horgan.

“If we are not supported and the Barrowtown pump station fails, we expect there will be eight feet or more of water over Trans Canada Highway 1 for months, which could result in a critical transportation route for residents, goods and services for the Lower Mainland being out of commission for up to a year,” Braun said.

By Saturday afternoon, local governments had issued evacuation alerts for low-lying areas in the Nicola Valley near Merritt and Spences Bridge, as well as the Pemberton Meadows area.

Environment Canada warned up to 120mm of rain could fall on mountainous regions like Squamish by Sunday afternoon, while other regions struggling to recover from recent floods also braced for more rain.

The centre that monitors the province’s waterways upgraded its advisory Saturday for parts of Vancouver Island to a flood watch, meaning rising rivers could spill out of the channels and flood nearby areas.

The River Forecast Centre’s flood watch applied south of Campbell River and Gold River, with the heaviest rainfall expected around Port Renfrew through to Cowichan Lake and the Sooke River watershed.

The centre further warned that the potential for flood flows extend onto the eastern slopes of Vancouver Island, including the Koksilah, Chemainus, Cowichan and Englishman rivers and surrounding areas.

“The public is advised to stay clear of the fast-flowing rivers and potentially unstable riverbanks during the high-streamflow period,” the centre said in a statement.

Flood watches were already in place for much of the Lower Mainland, and the centre added new high streamflow advisories for parts of the Interior around the Tulameen, Similkameen, Coldwater and Nicola rivers.

“Flooding last week has created increased vulnerabilities throughout the region and forecast flows, leading to increased risks to impacts,” it said.

In addition to weather concerns, the province said the closure of Highway 1 between Popkum and Hope is necessary due to reservoir releases by BC Hydro. It said the move is crucial to protect the Jones Lake Reservoir, which is also being affected by heavy rain.

BC Hydro said in a video statement that it’s working with the Ministry to monitor the reservoir and is prepared to release water to prevent overflows.

Crews were on standby across the province should the storms cause power outages, it added.

On Friday, Trudeau and Horgan held a press conference announcing a joint committee of cabinet ministers to deal with the devastation caused by flooding.

Trudeau said the committee would be used to establish a model for the rest of Canada as it deals with the effects of climate change.

The federal and provincial governments both also pledged to match donations for flood relief that are given to the Red Cross.

This report by The Canadian Press was first published Nov. 27, 2021. 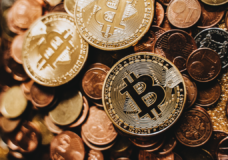 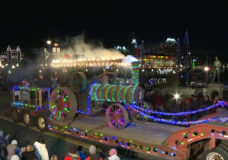