The husband of a pregnant woman attacked in downtown Nanaimo earlier this month says the government needs to change how it deals with drug addicts and the mentally ill living on the streets.

It comes after his 37-year-old pregnant wife was assaulted with a brick on Aug. 8.

Alex Sheaves says he was waiting outside a Nanaimo bookstore on Commercial Street when he saw a mentally unstable person causing a commotion.

“He threw his coffee on a guy in a wheelchair that was crossing the crosswalk and then seeing me looking he stepped towards me and hit the guy on the patio, grabbed the guy’s mug and started throwing mugs at me,” Sheaves told CHEK News.

Then Sheaves’ 34-week pregnant wife walked out of the bookstore with their 4-year-old daughter. As they walked to their car, a man across the street picked up a paving brick.

“He threw the brick at my wife and hit my wife right in the belly, and the brick went down her two legs so she had been pretty scratched up and bruised up on the legs,” recalled Sheaves.

Police arrested and charged Aiden Tye with two counts of assault, as well as exposure and committing a lewd act following another incident the day before the brick assault. Tye has a lengthy criminal record stemming back to 2005.

“It’s the middle of the day, there are people everywhere and he just went off the handle,” said Sheaves.

Sheaves’ interview with CHEK News was interrupted by another unstable man menacing a Nanaimo senior walking down the street, forcing him to call police.

“Like that happens all the time down here and it’s ridiculous because the government allows it to happen by allowing it to be legal for them to use drugs on the sides of the street and allowing them to sleep on the side of the street,” added Sheaves.

The head of the Victoria Cresent Association says the mentally unfit are causing many problems.

“A lot of people on the street need mandatory care and they don’t know it themselves living on the street and what they’re going through in their minds and mentally so we need to look after them. I hold the province and the federal government directly responsible,” said Kevan Shaw, the association’s president.

Alex Sheaves says his baby’s heart rate is normal but they won’t know if anything is wrong until their son is born. His four-year-old daughter is traumatized and they won’t be coming downtown again.

In a statement, B.C.’s Ministry of Mental Health and Addictions said: “We are urgently working with all partners to build a system of care to meet the needs of people with complex mental health and substance use challenges.”

The ministry added, “We also know that voluntary services are the most effective, when possible. That’s why one of our main priorities is building a voluntary system of mental health and addictions care that works for everyone. Providing access to quality care, balanced with the need for a voluntary continuum of services and respect for people’s choices continues to be a primary focus for our work.” 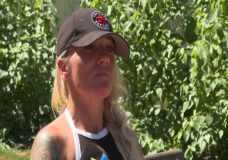 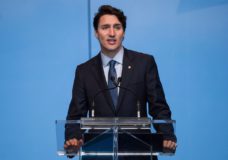