The Greater Victoria Sports Hall of Fame announced the names of the athletes, officials and builders who will be inducted into the Hall of Fame this year. The 2018 inductees will be honoured at the annual Induction Ceremony and Dinner scheduled for Saturday, Oct. 27 at the Westin Bear Mountain.

Calder was a prolific rower with achievements that included winning nine World Cup medals and a silver medal in the 2008 Beijing Olympic Games. Harden, a product of Layritz Little League, played for the Oakland A?s and the Chicago Cubs and is famously known for his ?immaculate inning? in 2008 with the Cubs. Murdoch captured many international golfing awards after she joined the Victoria Golf Club in 1998, including four Canadian Senior Women?s Championships, four Irish Senior Women?s Open Championships, and the British Senior Women?s Open Championship. Whitten, a goaltender for the UVic Vikettes and the Canadian National Field Hockey team, is a silver medallist in the Pan American Games (1991) and played in two World Cups and the 1992 Olympic Games.

In addition, three-time Olympic swimmer Ron Jacks will be honoured in the coaching category for services to swimming, and Ian Lamplugh in the official?s category for baseball. Jacks is PacificCoast Swimming?s Director of Swimming and one of very few coaches who has trained able-bodied swimmers, swimmers with a disability and open water swimmers to podium finishes. Lamplugh is BC?s most heralded umpire and a pioneer in his field, having worked over 200 Major League games from 2000-2003, in addition to umpiring in the Pacific Coast League as well as overseas in Taiwan and the Caribbean.

The two builder inductees will be Yeiji Inouye (Judo) and Hugh MacDonald (Multi-sports). Inouye served judo for over 75 years as an athlete, international-level coach, referee and provincial and national administrator, and he founded many Judo clubs on Vancouver Island including the Victoria Judo Club and the Cowichan Valley, Nanaimo and Comox clubs. As Executive Director of SportHost Victoria from 1996-2018, MacDonald was instrumental in bringing major international sporting events such as the 2005 and 2013 Ford World Curling Championships, and the 2019 World Junior Hockey Championships to Victoria. 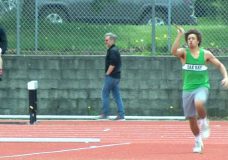 Nail gun shooting after a heated exchange in Colwood, one man taken to hospital