Washed up and wedged along the coast of northern Vancouver Island are four of the 109 lost containers from the Zim Kingston, with their contents of toys, fridges, and styrofoam scattered on the shore.

“It just an incredible volume of material that has come ashore to date,” said Karen Wristen, the executive director of Living Oceans Society.

The Vancouver Island company, Pacificus, has been contracted for shoreside cleanup and New Westminster-based company Amix for waterside recovery.

“We are focusing our efforts on identifying container locations right now, either floating or those that have become beached,” said a Canadian Coast Guard spokesperson to CHEK News.

So what about the many containers the Coast Guard presumes have already sunk?

“They’re out there being battered by heavy seas, the water-tight integrity is not that great, so there’s a good chance that a lot of them have already sunk,” said Mariah McCooey, a Coast Guard spokesperson on Wednesday.

If the sunken containers don’t meet the strict guidelines of Transport Canada or the Coast Guard recovery policies, environmentalists are concerned that the containers at the bottom of the sea will be forgotten.

“I have a feeling an awful lot of that material is going down and staying down,” said Wristen.

Specialists say potassium amylxanthate is an irritant and toxic to most animals.

“At the end of the day, it’s up to the ship’s master to decide how the ship’s loaded and unfortunately, because of COVID, there are huge pressures on shipping right now. It’s certainly creating an incentive to take more containers on board than is perhaps wise given the increase in storms,” said Wristen.

For now, the Coast Guard continues its search for the remaining 105 containers still unaccounted for. 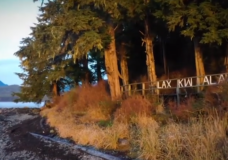 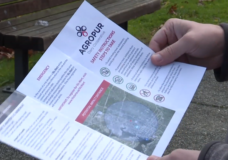