Pounding the pavement for a special one-day Wounded Warriors run, veterans and first responders try to raise awareness about PTSD.

“It feels incredible the adrenaline rush and I had to run twice today because just sitting in the car I was all antsy,” says runner Ashley Duncan, who works in emergency services.

The relay-style race — weaving its way from Sooke to Sidney is a first — and a warm-up for a much larger Vancouver Island-wide run later this month.

“This is new for us and these are new communities and to have this giant hug of welcome everywhere we go really embodies what the mission of Wounded Warriors Canada is, that we’re all in this together,” organizer Jacqueline Zweng  says.

The first Island run started seven years ago to raise funds and awareness for Wounded Warriors Canada, which helps veterans and now first responders struggling with PTSD and other operational stress injuries.

“At the time there was a lot of items in the news and society about fellow brothers and sisters in arms harming themselves, committing suicide and we wanted to  tell people out in our communities it’s okay to talk about it and we don’t need to stigmatize this,” explains BC run co-founder Dan Bodden.

“We all go through a little something.”

And the message is getting out — with more than $100,000 raised last year and increasing awareness.

“With all these stops every year down the Island, there’s more and more people coming out and talking,” says Bodden.

“Don’t hesitate to reach out and ask for help,” says Duncan, who’s had her own mental health struggles. “There’s always going to be people who will understand and will be there for you. We’re here for you, and that’s the message we’re trying to bring — you’re not in this alone.”

This year’s Wounded Warrior BC run will kick off in Port Hardy March 23rd with teams of eight runners and support staff making their way down the Island.

They’ll stop at legions, community halls, fire halls, and ambulance and police stations along the way before ending at the B.C. Legislature March 1st. 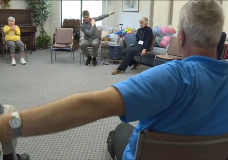